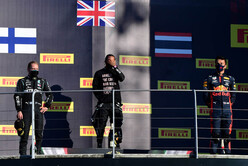 Lewis Hamilton could face investigation by the FIA after the world champion wore a slogan emblazoned T-Shirt during the podium ceremony.

Before the race, the world champion was wearing a black T-Shirt which read "Arrest the cops who killed Breonna Taylor" on the front and "say her name" on the back, along with a picture of Ms Taylor.

Asked at the post race press conference if the T-Shirt marked a change in direction from the 'Black Lives Matter' T-Shirt he has been wearing, the Briton replied: "Not much of a change, it's still fighting the same thing. It's just... it took me a long time to get that shirt and I've been wanting to wear that and bring awareness to the fact that there's people that have been killed on the street and there's someone that got killed in her own house, and they're in the wrong house, and those guys are still walking free and we can't rest, we can't... we have to continue to raise awareness with it and Naomi has been doing amazing, so huge congratulations to here, and I think she's an incredible inspiration with what she's done with her platform. I think we just have to continue to push on the issue."

However, the FIA has strict rules on political statements being made at it event, having censured organizers at the inaugural Turkish Grand Prix, and the world champion could face investigation, a spokesman confirming that the matter is "under active consideration".

Asked whether the message on the T-Shirt is considered political, the spokesman added: "That's the consideration we are looking into."

"It is entirely his decision," said team boss, Toto Wolff in reaction to the T-Shirt. "Whatever he does, we will support.

"The team is fighting against any kind of racism and discrimination," he added, "and it is Lewis's personal fight for Black Lives Matter and with all the support we can give him. It's his call."

The FIA statutes require that competitors "refrain from manifesting discrimination on account of race, skin colour, gender, sexual orientation, ethnic or social origin, language, religion, philosophical or political opinion, family situation or disability in the course of its activities", while the sporting code forbids competitors from "affixing to their automobiles advertising that is political or religious in nature or that is prejudicial to the interests of the FIA".

At the inaugural Turkish Grand Prix in 2006, the race winner's trophy was presented by Mehmet Ali Talat, who was introduced via the on-screen captions as the president of the Turkish Republic of Northern Cyprus, a state which is recognised only by Turkey.

Officials withheld the identity of the person presenting the trophy until the last minutes, which meant the FIA had no time to act.

Fearing the move would breach the governing body's neutrality the FIA investigated the incident, which at one point was feared would lead to the cancellation of future races FIA-sanctioned in the country. However, organisers were fined $5m, which was subsequently reduced to $2.5m.