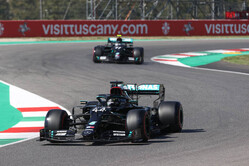 Valtteri Bottas made it a clean sweep earlier, the Finn topping the timesheets in all three practice seconds.

However, the hot breath the Mercedes driver could feel down the back of his neck wasn't from his teammate, but Max Verstappen who was just 0.017s behind.

Strong on the mediums and the softs, the Dutchman looks set to take the fight all the way to the Black Arrows this afternoon and tomorrow.

Naturally, we're not writing-off Lewis Hamilton, who was only 0.083s off Bottas' pace, we're simply making clear that Master Max is very, very much in the mix.

Behind these three it's pretty much up for grabs, with Racing Point and AlphaTauri looking strong, while Renault and McLaren have yet to find their feet.

Despite this weekend being a celebration of Ferrari's longevity - tomorrow's race being the Maranello squad's 1,000th Formula One World Championship start - it's unlikely the Italian team will have much to cheer about, Messrs Leclerc and Vettel lucky to finish in the points... never mind on the podium.

Kimi Raikkonen, who made his F1 (test) debut here twenty years ago (yesterday) has looked strong all weekend, and surely nobody would deny the 2007 world champion a few points tomorrow.

If there are any positives from the pandemic, F1's log-awaited arrival at Mugello has to be one of them, the Tuscan dream everything we all expected... and more. And with the likes of Portimao, Istanbul and Imola still to come, it's hard to believe the phoenix that has risen from the flames of Melbourne all those months ago.

In a late move, while officials have allowed the gravel traps to decide the track limits, a directive has been issued notifying that drivers who cut the chicane (Turns 13/14) will have their times deleted.

The lights go green and first out is Russell who failed to post a time earlier today due to a brake-by-wire issue. The Williams driver is joined by his teammate.

Stroll and the Alfas - a good name for a band - head out. As do the Black Arrows and Verstappen.

Stroll goes quickest with a 16.701, ahead of Giovinazzi, and Raikkonen, only for the Alfas to be demoted when Perez posts 17.008.

Norris can only manage fifth (17.350), as McLaren continues to struggle.

Albon goes sixth with a 17.018, while Ricciardo goes tenth and his Renault teammate eleventh.

Racing Point is running new bargeboards this weekend, but as it only has one set it is Latifi who gets them... because he is ahead of Perez in the championship.

Behind the leading three, the rest of the field is covered by under a second.

One by one they head out for the final assault, though it is unlikely we will see the Mercedes pair or Verstappen.

That said, Hamilton heads down the pitlane.

Perez, who went out much earlier than anyone else, improves from fifth to fourth with a 16.596. Teammate Stroll has settled for his time.

Lots of PBs in the opening sector, though Russell messes up his second.

Grosjean goes tenth as the times tumble. All except for Gasly who can only manage 14th.

Sainz goes 8th, but is quickly demoted by Ricciardo and then Norris.

Leclerc goes sixth and Vettel 15th, the German once again making the cut by the skin of his teeth.

It's back to reality for Gasly, who misses the cut, along with Giovinazzi, Russell, Latifi and Magnussen.

Replay shows Vettel having a big moment at Turn 4 as the wind picks up.

Unusually, when the lights go green, there are a number of drivers ready and waiting at the end of the pitlane, with Hamilton and Bottas heading queue.

As more and more drivers head out, all are sporting the softs, nobody seemingly willing to gamble on the mediums.

Norris is tenth, ahead of Kvyat, Sainz, Vettel, Raikkonen and Grosjean.

A breathless Ricciardo admits that "that one was pretty decent".

Replay shows a highly questionable release for Stroll, right into the path of Verstappen. The Dutchman takes it in his stride... not even the mildest of profanities crossing his lips.

The Points are first out, followed by the Ferrari, shades of Monza as teammates are clearly seeking a tow.

Perez posts a PB in S1, as does teammate Stroll. The Mexican crosses the line at 16.489 to go ninth, while Stroll fails to improve and remains sixth.

Vettel improves his time but remains 13th, once again he misses the cut. Raikkonen improves to 13th.

Raikkonen improves to 13th, he misses the cut but finishes ahead of Vettel. Leclerc is 8th.

As we head into Q3, that last phase (Q2) was the first time this weekend that Hamilton has out-paced his teammate.

The lights go green and Stroll leads the way, followed by Sainz, Hamilton, Bottas and Verstappen.

Sainz, having overtaken Stroll, begins his first flying lap, as Ocon is the only driver not on track.

Behind the McLaren, the Black Arrows trade fastest sectors.

Asked about balance, Verstappen reports that it is "fine... I just didn't have more grip".

Hamilton leads the way as the final assault gets underway. Soon all bar Perez are on track.

Sainz reports that it's a "bit windier now".

A poor opening sector for Hamilton, but in S2 the Briton goes purple.

Behind the world champion waved yellows are the order of the day after Ocon stopped on track following a spin.

The yellows means that most drivers fail to improve, though Leclerc, who was not affected, improves to 5th with a 16.270.

So, Hamilton takes an unchallenged pole, and will start ahead of Bottas, Verstappen, Albon, Leclerc, Perez, Stroll, Ricciardo, Sainz and Ocon.

While Verstappen insists that he never really expected to challenge the Mercedes for pole, there is no disguising Bottas' disappointment, the Finn clearly ruing the yellows that followed Ocon's spin.

However, as Scarlet O'Hara once opined, tomorrow is another day, and on the evidence thus far Lewis is going to have a fight on his hands.