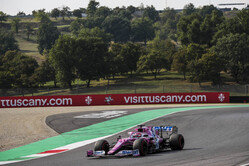 Sergio Perez has been handed a one-place grid penalty for causing a collision with Kimi Raikkonen during free practice.

As he was leaving the pits, the Mexican was warned by his team of the approach of the Finn and Alex Albon. In addition a blue flag was waved at him prior to Turn 1 and it was apparent that he saw the Alfa Romeo in his mirrors.

Perez told the stewards that the pit exit is extremely long and he had reached a high speed by the time he was passed by Raikkonen and that he was unable to take a different approach to the turn.

The stewards considered there to be some merit in mitigating penalty and therefore reduced the normal penalty for an offence of this type from 3 grid positions to 1, noting that a grid penalty is appropriate as Perez was exiting the pits, whereas Raikkonen was on a fast lap and therefore the Mexican was wholly to blame.

"It was a shame to have had the collision with Kimi," said Perez. "It’s very tough to see another car when you're coming out of the pit lane and the angle to re-join the track is difficult too.

"I knew he was close," he admitted, "but it's very difficult to judge the distance between cars and I couldn’t avoid him sadly.

"It just shows that it’s going to be tricky on this narrow circuit this weekend and we know that track position is going to be very important here."