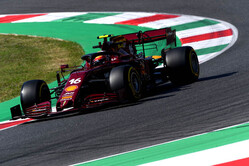 This morning, shortly after 11, the two SF1000s took to the track in their special Burgundy livery, the deep red originally seen on the 125 S, the very first Ferrari ever built, to complete their installation lap to kick off the Maranello marque's 1000th Grand Prix in Formula 1. At this historic moment, fans in the grandstand applauded as Charles Leclerc and Sebastian Vettel drove out of the garage. It was a very symbolic and important moment, combining the legend and tradition of the Prancing Horse with the much awaited presence of fans in the grandstands for the first time this season, their absence down to the current pandemic.

The Prancing Horse has owned the Mugello circuit since 1988, so this was very much a home race for the team, whose two SF1000s completed a total of 120 laps of the 5.245 kilometre long track, almost the equivalent of two race distances in Sunday's Toscana-Ferrari 1000 Grand Prix. The team worked through its usual programme, focused on fine tuning the car and evaluating the tyres, Pirelli having supplied their three hardest compounds for this weekend.

Charles and Seb did 27 laps each, while working on different programmes at first. For the first 40 minutes Charles ran the Medium tyres and Sebastian used Hard. Leclerc set a time of 1:19.468 and his team-mate posted a 1:21.333. Work then switched to qualifying mode running Soft tyres with which Charles did a 1:18.186, third fastest in the session and Seb was 13th with a 1:19.267.

The afternoon session was red flagged twice: the first after Lando Norris went off in the McLaren and the second after Sergio Perez and Kimi Raikkonen collided at turn 1. The stops slightly affected the Scuderia's programme as its drivers only managed one qualifying-type lap with Leclerc doing a 1:18.400, which was slower than his morning time and Vettel a 1:18.498. The drivers had switched programmes with Charles this time starting on the Hard tyres and Sebastian evaluated the Mediums. Towards the end, both drivers ran in race configuration with various tyre compounds and fuel loads. On his last lap, Sebastian's car stopped at the side of the track because of a trivial electrical fault that has already been fixed.

Charles Leclerc: "Driving an F1 car around this circuit is unbelievable. In all the fast sections it's pretty impressive. I think it's going to be quite a tough race, physically, as already in the long run we've done in FP2 the neck starts to feel it! The lack of run-off areas will also make it difficult, but I guess this is what we like as well. The first session went well but maybe where we ended up in the second one is a more realistic picture, when we struggled a bit on the hard tyre.

"We also need to work on the balance, as we are not really there yet. It's all very close but I think we can make a positive step tomorrow. I am optimistic."

Sebastian Vettel: "It was an interesting day. Mugello is a very nice track which is very enjoyable for the driver, even if it is quite brutal on tyres. I'm still not happy with the balance of the car.

"We are working on it and there's still plenty to do, but it is Friday, and this is what Fridays are for. I think that there's the potential to find a better set-up on the car and that we will find some small things. I'm confident we can improve it for qualifying."