Bottas continues to set the pace at Mugello 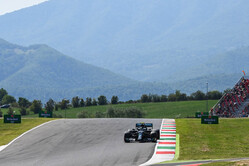 Ahead of today's second practice session the air temperature is 29.2 degrees C, while the track temperature is 45.5 degrees. It remains bright and sunny.

Valtteri Bottas set the pace earlier, and what a pace it was, the Mercedes averaging over 150 mph around the three mile track. Could we witness a 155 mph average tomorrow.

Max Verstappen was second quickest, ahead of Charles Leclerc and Lewis Hamilton, while the AlphaTauris were both in the mix.

The Points were at the wrong end of the timesheets, but this was surely more about getting info on the tyres, in particular, as opposed to a major pace deficit.

McLaren is running a new Mercedes-influenced nose, though we hope this won't lead to any protests.

While Ferrari, particularly Leclerc, has shown good pace, one tends to remember the many years the Italian team would produce a 'Monza special' with a view to getting as near the front of the Italian Grand Prix grid as possible, thereby putting a few more thousand bums on seats.

Unless, they've done a 'naughty' again, Ferrari has not discovered that 'silver bullet' in the last seven days. That said, Raikkonen and Grosjean have looked strong.

The lights go green but it is several minutes before a driver heads out, it is Magnussen, who is followed by Grosjean, Norris, Ricciardo and Sainz.

Magnussen posts 21.518 but is immediately eclipsed by his teammate who stops the clock at 19.257.

An 18.658 sees Norris go top as Raikkonen goes third (20.052), ahead of Ricciardo, Sainz and Magnussen. A mixture of mediums and hards.

The Ferrari pair head out.

Kvyat goes third with a 19.601, ahead of Vettel, Raikkonen and Sainz. The German only ran the hards earlier, now he's trying the mediums.

Grosjean warns that his battery is not charging.

Going quickest in the final sector, Perez goes second overall with an 18.858.

After a spin in Turn 12 as he came upon a slow Alfa, Leclerc heads back to the pits.

Bottas aborts his first fling lap after coming across a slow Albon in Turn 2.

Next time around however the Finn goes top with an 18.019. Teammate Hamilton posts 18.652 to go third, Verstappen being the meat in the sandwich.

However, while Bottas is on mediums, the world champion is on hards. The next highest-placed driver on the white-banded rubber is Raikkonen down in 13th.

"Not good, I'm bottoming out on the straight," reports Norris.

Things are little better for his McLaren teammate, who says he is "struggling in the hairpins".

As Latifi climbs from the Williams, the track falls silent, bar Hamilton who has the track to himself. However, the Briton subsequently pits.

With just under an hour remaining, the drivers begin to head out again, and now the softs appear to be the order of the day.

An 18.039 sees Ricciardo go second, as Raikkonen goes sixth, ahead of Leclerc, Stroll, Vettel and Norris.

A big off for Norris at the exit of Turn 3.

Replay shows that after running wide, the Briton lost it after keeping his left-front in the gravel. He bounces across the gravel and clouts the barriers.

The session resumes with 42 minutes remaining, and in no time at all there are a number of drivers on track, including the Black Arrows and Verstappen. Again, softs are the order of the day.

Hamilton responds with a 17.196, having gone quickest in the final sector only.

Leclerc aborts his lap, after encountering traffic early in S2.

Grosjean's session is over reports Haas, the Frenchman understood to have suffered an electrics issue.

Hamilton asks if anyone is improving on their second lap on the softs, he is told that the majority of the second flyers are "pretty poor".

"We lost gear sync," reports Albon, which appears to be a common fault for the Red Bull this year.

We are now well into the race sims, and Raikkonen leads the way in terms of the number of las completed (27). Vettel has completed 25 and Stroll 23.

A rare spin for Raikkonen at T1, however, replay shows the Finn got clipped by Perez as he left the pits.

The Finn reacts with customary grace.

The session is red-flagged as the debris is removed.

Just before hand, Max Verstappen ran over the apron along the pitlane exit in his efforts to pass Magnussen.

The stewards have noted the incident.

The session resumes with 13 minutes remaining.

A number of drivers report that their tyres are overheating.

Verstappen showing good pace on his long runs, but the Mercedes pair clearly have the edge, while the Points are very much in the mix. That said, while most are setting their pace on the mediums, Hamilton is still on the hards.

A big lock-up for Albon as he enters the pits.

Moments later, Vettel grinds to a halt between Turns 11 and 12. "The engine has stopped," he sighs. Never mind, it's Mercedes power next year.