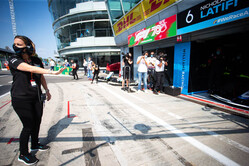 Nicholas Latifi finished 11th and George Russell 14th in an action-packed Italian Grand Prix. George started the race 19th, with Nicholas lining up 20th, both on the medium compound tyre.

Nicholas pitted on lap 16 for the hard Pirelli tyre, with George pitting for the hard compound on lap 22 once the pitlane had reopened following Magnussen's retirement at the pit entrance.

Both drivers took the opportunity to change onto the medium compound during the red flag period after Leclerc's crashed caused substantial damage to the barriers.

After 43 years and 739 Grands Prix, this weekend's Italian Grand Prix marked the final race for the Williams family in Formula One.

Dave Robson, Head of Vehicle Performance: The race was fairly mixed-up following a series of incidents, which, along with some retirements, allowed us to race to a strong result. It is very frustrating to beat all our main rivals with Nicholas, and still finish just short of the points.

Although the drivers both raced well, and the car worked well today, we just lacked the raw pace to trouble the top ten. Following the disappointment of yesterday, it was nice to race hard and the experience we gained today will help us to improve as a race team. Our attention now turns to Mugello and the Tuscan Grand Prix. The circuit will place demands on the car that are quite different to those of Monza and we look forward to taking on the challenge of a new venue for Formula One.

Nicholas Latifi: It was a very tricky and eventful race. I lucked into the position having completed the pitstop prior to the red flag. It was nice that I got to experience a top 10 starting position with the restart following the red flag. We are still struggling on those opening laps, with cold tyres and dirty air. It seems that the other cars can do much more, whilst I am trying not to crash and maintain the position. I am disappointed that I slipped out of the points. Once things settled down, I think the pace was alright and I managed to catch Kimi which was nice to have some kind of a battle. I am happy with the overall result, but it would have been nice to reward Claire and the team with some points today.

It's been a huge privilege to race for Claire and Frank. From the moment I joined the team I felt right at home, and it was very clear the atmosphere and culture they've instilled is valued. You can understand why so many of the employees' love working for them and the team. I'm going to miss them, Formula One is going to miss them, and I want to wish them all the best of luck for the future wherever life takes them.

George Russell: It was an unfortunate race and we were unlucky not to pit before the red flag. The car was feeling really good, we were just slow on the straight. Every time I overtook a car, they just passed me on the straight. It is a shame, because I think we could have scored points today. The car was feeling fast but that is just racing. I am really happy to see the top four finishers today; it is absolutely awesome for them.

It's also the end of an era and it's been a privilege to be a part of it. What Claire and Frank have done for the team, and for the people that work for the team, is extraordinary. They've always kept them in their hearts and that's still the case now.

Claire Williams, Deputy Team Principal: It has been my greatest privilege and my biggest honour to work with everybody in our incredible team. But more importantly from Frank, myself and everybody in the Williams family I would like to thank all of our team, past and present, for everything they have given to us over the years. They are the true warriors of this team and we wish them all the success in the world for the future. We would also like to thank all of our fans around the world who have supported us through thick and thin for so many years. You have humbled us. Our time in this sport has been a huge privilege, we leave with so many memories, we have been through highs and lows, triumph and adversity and will forever love Formula One.