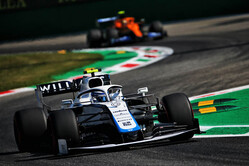 Dave Robson, Head of Vehicle Performance: We have a bit of work to get through tonight to see where we can improve the car as we are not currently where we want to be. There are probably a few easy gains from where we were today, but there are other areas that require a bit more thought to see if we can better balance the speed on the straights and in the corners.

FP1 was a good session with Roy Nissany taking George's seat and again impressing with this pace and feedback. He did a good job at what can be a challenging circuit, and, as in Spain, his contribution to the engineering programme was excellent and well judged. George took back his car for FP2 and was quickly up to speed. He tried to push the set-up very hard for his second run, which helped expose the car's limitations, and has given us something to look at overnight. Nicholas had a good day making progress in both sessions as he too experimented with set-up. Conditions were calm and consistent throughout the day, allowing him to try a few things. In the end, he set his best time on his second attempt on the new Soft tyre, which suggests there is a quite a lot more to come tomorrow when the Soft compound will easily be a single timed lap tyre.

Nicholas Latifi: It is no secret that we are carrying a lot of drag on the car and the straights are a bit of a challenge. We were quite far off in FP2 but there are still a lot of places that we can improve the car, it is not in the window that I want it so we can definitely be closer than we are. It is early days and we normally make a step forwards for qualifying. There is some work to do tonight.

George Russell: It was tricky out there. We went quite extreme with the set-up for my second low fuel run and it was too far, which is why I only improved one tenth from my first run to the second. Our pace is definitely much better than we showed on paper today but I don't think we are necessarily in the fight with Alfa and Haas this weekend. The characteristics of this circuit do go against us. We will be there in the race though and see what we can do.

Roy Nissany: It was another great FP1 session and we tested all the items that we wanted to. I was very pleased with my own performance, and the team was as well. I feel like I have made good progress since my first FP1 outing in Barcelona. We did well there and even better today, so I am happy, satisfied and it was emotional to drive such a legendary track for the first time in a Formula One car. As always, I kept my emotions down, had my robot mode on and performed.