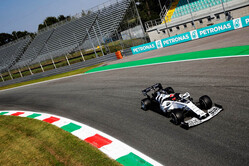 Pierre Gasly: "Today was by far the best Friday since the start of the season. We were sixth this morning and fourth in the afternoon, and I must say the feeling in the car was really good! I could push and managed to put in some good laps. Unfortunately, we had a small issue with a damper at the end of the session while doing the long run, so we had to stop a bit earlier than the others, but generally speaking, we are pretty happy. The low downforce set-up that we have here in Monza works quite well, but I feel like we can still improve a bit for tomorrow. I think there will be a few surprises with the new engine mode rules, so we'll see. It's very tight and, especially here with the tows in Qualifying, it will be important to get it right."

Daniil Kvyat: "It was a pretty good Friday. We worked on both short and long runs and managed to complete many laps without any issues. I think we did a good job today, even if I wasn't entirely happy with my shorter runs. We'll keep on working to improve further for tomorrow when it really counts."

Jonathan Eddolls (Chief Race Engineer): "The team showed a good performance last weekend in Spa, both in qualifying and the race. Coming to Monza - which shares some similar characteristics to Spa, particularly on the aero efficiency - we were expecting to show another strong performance in the midfield.

"We spent FP1 understanding the optimal aero configuration of the car, so we completed multiple tests across the two cars to work out what the best compromise between downforce and drag was. We also looked at optimizing the set-up; one of the big differences this week is that the track is considerably hotter than it was last week, so the tyres perform differently.

"We faced some different balance limitations here compared to previous weeks, so we worked toward addressing those in FP1. The drivers were happy with the performance but not super happy with the balance coming out of first practice, so we made some further changes for FP2, which appeared to be in the right direction as the car is looking competitive over both the short and the long run.

"Pierre's running at the end of FP2 was cut short as we saw an issue on a damper when he came into the pitlane for his last pitstop, but in the end, he didn't miss too much time in the session. It will be difficult to understand where everyone is because of the introduction of the latest technical directive, which refers to engine modes. We know what is best for our weekend, but we don't know what other teams are doing on Friday.

"It will be a bit trickier to understand the true ranking of the field, but from all of the data we've gathered, we're in the mix and we've got the ability to fight in the midfield. We're looking forward to putting in a good performance for Qualifying tomorrow, as well as Sunday's race."