Finally, some good news for Ferrari 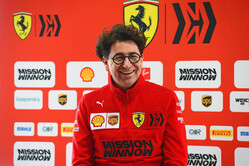 Though the news that all ten teams have effectively signed up to the new Concorde Agreement was one of the main talking points as the circus rolled up at Spa, the various team bosses made it clear that the agreement remains "confidential" and nobody was willing to go into details.

Toto Wolff subsequently admitted that his team had had to make compromises, but on the whole everyone seemed happy to have an agreement and be able to move on.

For Mercedes, the main sticking point was money, the German team unhappy that despite the levelling of the playing field, Ferrari and Red Bull would still be favoured even though the Black Arrows are one of the main attractions for 'the show' as it currently stands.

While Christian Horner complains of a "sour taste" as a result of the FIA's confidential agreement with Ferrari following the investigation of its engine, a comment from Chase Carey that appears to have gone under the radar may well leave the Red Bull boss gagging.

According to the official F1 website, Ferrari will "continue to get some extra recognition", and while the American was unwilling to go into details - another confidential agreement? - one has to wonder if this concerns money or the team's infamous power of veto.

"I think we've addressed those, made them more targeted, made them more manageable as part of the governance structure. But yes, we continue to recognise Ferrari's unique role in the sport."

As has been previously reported, despite the relative lack of success, the current arrangement virtually guarantees the Maranello outfit around $100m a year, irrespective of its position in the standings, and more than successive double-title winners Mercedes.

"We thought the (old) revenue distribution was too skewed," admits Carey, "so we've created a more balanced distribution still rewarding success on the track, but clearly making it something that gives every team the chance to have a healthy business model and the resources to be successful on the track.

"And when you combine it with the cost cap we think those elements together provide the foundation for much better competition and a much healthier business.

"It was encouraging to see the way ultimately how the teams came together and supported this," he added. "In many ways I'd like the Concorde Agreement in the future to be less of a dramatic moment in time.

Though asked about the veto, Christian Horner was uncharacteristically evasive.

"I think it's a fair agreement," said the Red Bull boss. "If people didn't like it, they wouldn't have signed it. I think that everybody is treated equally.

"The content of the agreement is going to remain confidential between the parties," he added, "and that's the way it will remain."

"For sure, the smaller teams will be never happy until they get more and it gets 'inequal' in their favour," said Guenther Steiner. "As far as going into details, I don't want to here, of the commercial agreement, it's between the parties, but I think it was made a big step from the last one to this one.

"To make ten people completely happy, which are structured different between the ten of us, is almost impossible," he admitted, "so I think it was a good step made in that direction and I guess everybody was happy, because everybody signed it. Because if somebody wasn't happy, they wouldn't have signed it."

Looking ahead, he said: "We don't know what's coming. We're certainly planning on a 2021 that may not be completely business back to normal but is pretty close. It's certainly a schedule like we planned this year with 22 races, we're planning to have fans at races in the backend of the 2020 schedule.

"We plan to have fans, we plan to have a schedule that looks like that, and I think the world is going to need to figure out how it moves forward, how it begins to do these things. In some ways I think it provides us an opportunity for these countries to show that they are moving forward."