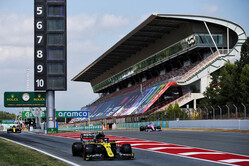 It was inevitable that in the moments after Esteban Ocon speared into the barriers during the final practice session in Barcelona, Kevin Magnussen would get the blame.

The Dane's Haas overtook the Renault then suddenly slowed, and seemingly in a bid to avoid a collision the Frenchman swerved to his right and hit the barriers.

Indeed, in the aftermath, when asked what happened, Ocon told his team: "I let past Magnussen because he was on a timed lap and he decelerated."

And while the usual suspects reached their conclusion, the stewards, having spoken to both drivers, team representative and studied various video evidence, deemed that no further action was necessary and nobody was to blame.

"Ocon was on an out lap having just exited the pits," read the stewards conclusion. "Magnussen had just completed a timed lap. Magnussen passed Ocon going from turn 2 to turn 3 but then began to slow. On the straight, halfway between turn 3 and turn 4 Ocon swerved to avoid a slowing Magnussen and crashed against the wall.

"Discussing the incident with the drivers and examining the evidence, the Stewards determined that Magnussen lifted and slowed using ERS harvesting; there was no use of the brakes that contributed to the accident. This was confirmed with telemetry. Magnussen pulled gently off line, having been advised of following traffic on fast laps.

"At the same time Ocon was also moving to the right to let traffic by and was looking in his mirrors for the cars following. When he subsequently looked forward, he was surprised to see Magnussen directly ahead of him and swerved to avoid a collision.

"Both drivers and the Stewards agreed that it was an unfortunate accident and that neither driver was to blame. The Stewards therefore take no further action."

Nonetheless, it could have been a lot worse, and in all honesty it wasn't an isolated incident. We are increasingly seeing drivers completing two 'cool down' laps while others are on their flying laps, the speed differentials between the two absolutely terrifying, and consequently it is feared that a major accident is inevitable.

As a result, with an eye also on the ongoing practice of drivers heading out in a group during the latter stages of each phase of qualifying, there are calls for action.

"It's not really acceptable to have a queue of cars," said Ocon. "If there is someone coming up at race speed, it can be dangerous. This has been the trend.

"In hot conditions, we are a minute slower on a cool-down lap or to prep the lap," he added. "It's very, very slow.

"We need to limit," said, referring to a minimum lap time. "To start my last lap, I was basically clutch in and I stopped. I was literally doing zero kph in the middle of the line. It's very, very extreme nowadays."

"It was raised at the drivers' briefing at Silverstone," said Romain Grosjean, a director of the Grand Prix Drivers' Association. "I think it will be raised again.

"We can go faster," he added, "but we're just not going to do another fast lap.

"Yes, it's a safety matter," he admitted. "I'll tell you one thing, you don't feel confident at all driving so slow whilst cars are coming so fast. There are places where the mirrors, they're only good enough. The radio communication, we try to do our best.

The Frenchman points to the tyre temperatures which are a major factor in the conundrum.

"We have got to lose about 30 degrees in one lap," he said. "To lose 30 degrees, you need to go as slow as you can, spend as much time as you can, and just not generate any load on the tyres.

"We've mentioned a few times, something will happen one day," he warned. "We saw a bit of a hairy moment," he added, referring to his teammate's encounter with Ocon. "Luckily it wasn't too high speed... but it doesn't feel right."