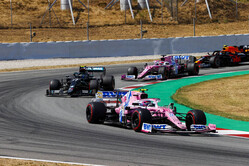 Bang on cue, at race end Renault lodged another protest with the Barcelona stewards in terms of the conformity of the rear brake ducts on both the Racing Point RP20s.

The protest came at the end of a race in which the French team failed to score any points, while its Silverstone-based rival scored 22, thereby moving up to third in the team standings.

As will become the norm until the International Court of Appeal rules on the issue, the stewards subsequently issued the following statement:

"On Wednesday 5 August, 2020 a Special Panel of Stewards was formed by the authorities that appointed the Stewards to the previous three Grand Prix to hear together the protests lodged by Renault DP World F1 Team against the cars of BWT Racing Point F1 Team. The Stewards have taken notice of the decision in Document 4 (including the note in Document 5) of the Special Panel.

"The Stewards of the 2020 Spanish Grand Prix believe that is important for the orderly conduct of the sport that the interpretation of the regulations by the stewards be reasonably consistent. The Stewards therefore join the decision of the Special Panel of Stewards and incorporate herein by reference, their findings of fact, reasoning and the reasoning behind their choice of penalties. This present decision should be read as entirely consistent with and drawing the same conclusions as Decision Document 4 (incl. Doc. 5) of the Special Panel.

"The Stewards therefore find that BWT Racing Point F1 Team is in Breach of Appendix 6 of the 2020 FIA F1 Sporting Regulations and order a Reprimand for the Team, operating Car 18 and Car 11.

Following the publication of the stewards decision, Renault withdrew its protests and had its protest fee returned.

Speaking at the start of the weekend, team boss, Cyril Abiteboul made clear that his team is not merely looking for Racing Point to have points deducted but to be excluded from all events in which the illegal parts were used.

When asked how many points Racing Point should forfeit, he replied: "We were expecting a consistent sanction.

"With other sanctions that we've seen in the past, and the most recent one being the one we accepted last year after Suzuka when we were found in breach of the Sporting Regulations and not the Technical Regulations and excluded from that event and therefore losing all our points. There was no discount for Renault, so I don't know why there should be a discount for Racing Point.

"It should be all the points of the events that have been protested," he insisted.

"I think we are also going to be in a bit of a strange situation where, after every single event, Otmar will be called to the stewards, his brake ducts will be found similar to what they were, and unchanged, and again he will receive a reprimand. So we are facing the prospect of - what - almost ten races or something like that, or a bit less than that? Where his cars will be reprimanded. So, it's a bit of a strange situation and I think that we'd like to have a bit more clarity about that.

"Not necessarily saying that they should be excluded for the season - but I think that also from a communication standpoint to the fan, to the public, explaining why your car is still somewhat in breach because he will receive a reprimand, but it's OK to be part of the Championship and therefore to be eligible for points. We think it's a bit awkward. So we would like also some closure about that, if possible."