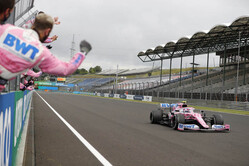 While Ferrari and Renault appeal the stewards ruling on the Racing Point RP20, Williams has followed McLaren's example and opted not to proceed.

In a statement issued on Wednesday morning, the Grove outfit said:

"After careful consideration, Williams have elected not to proceed with the formal appeal. We believe the FIA’s decision to seek the prohibition of extensive car copying for 2021 onwards addresses our most fundamental concern and reasserts the role and responsibility of a constructor within the sport, which is fundamental to Formula 1’s DNA and Williams core beliefs and principles."

While McLaren is due to use Mercedes engines from next season, Williams recently confirmed that Toto Wolff continues to hold a 5% stake in the Grove outfit.

On Friday, ahead of the original 24-hour deadline, McLaren and Williams both notified the FIA of their intent to appeal.