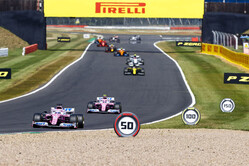 Shortly after the end of the race, Renault once again protested the two RP20s of Lance Stroll and Nico Hulkenberg.

The stewards agreed that "the front and rear brake duct assemblies used during the qualifying sessions and the race appeared to be the same as the ones used during the Styrian, Hungarian and British Grand Prix."

The stewards ordered the Technical Delegate to inspect the brake ducts of both cars and his report concluded that the ducts on the cars "are probably of the same design as the brake ducts used at the previous three Grand Prix".

The stewards then summoned the team representative of Racing Point, who confirmed in writing that the brake ducts were of the same design as those used at the previous three Grands Prix.

On Wednesday 5 August, a special panel of stewards was formed by the authorities that appointed the stewards to the previous three Grands Prix to hear the protests lodged by Renault against the RP20s.

The Silverstone stewards, in taking notice of the decision in document 4 (including the note in document 5) of the special panel, "believe that it is important for the orderly conduct of the sport that the interpretation of the regulations by the stewards be reasonably consistent. The stewards therefore joined the decision of the special panel of stewards and incorporate herein by reference, their findings of fact, reasoning and the reasoning behind their choice of penalties. This present decision should be read as entirely consistent with and drawing the same conclusions as Decision Document 4 (incl. Doc. 5) of the Special Panel."

The stewards therefore found that Racing Point was in breach of Appendix 6 of the 2020 FIA F1 Sporting Regulations and ordered a reprimand for the team.

Renault subsequently withdrew its protest and the stewards ordered their protest fee returned.

In a statement issued shortly before the race, team owner, Lawrence Stroll hit out at those rival teams seeking to appeal the original decision of the special panel.

"I have never cheated at anything in my life," he said. "These accusations are completely unacceptable and not true. My integrity - and that of my team - are beyond question.

"Everyone at Racing Point was shocked and disappointed by the FIA ruling and firmly maintain our innocence," he added.

The FIA's head of single-seater matters, Nikolas Tombazis explained that the reprimand was for continuing to use the ducts because they only breached the sporting regulations.

"The stewards took the view that it was the process that was at fault and not the components themselves," he said. "In the first of these protests, in the Styrian Grand Prix, they applied the sanction of championship points and financial sanction. But they deemed that sanction was covering all the issues with the process.