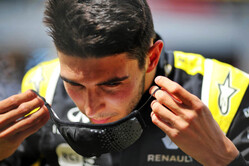 At the exit of Turn 5, Antonio Giovinazzi was at the head of three cars and was on an in-lap, Ocon was next, on an out-lap and Russell was on a flying lap.

While Russell approached, the team advised Ocon on the radio about Giovinazzi ahead, but didn’t advise about Russel until very late.

As Russell approached the two cars ahead, Ocon pulled to the right to overtake Giovinazzi and clearly impeded the much faster Russell.

The team admitted that they did not assist their driver in this instance which led to the impeding.

At the end of the session, the Frenchman admitted to his team that the incident had been "bad" and that he expected to be penalised.