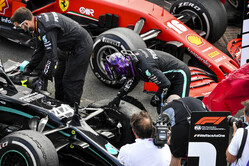 Speaking in the German team's video debrief, Vowles ruled out the possibility that the Dual Axis Steering (DAS) was in any way responsible for the failures that cost Valtteri Bottas an almost certain second-place and saw world champion, Lewis Hamilton effectively finish the race on just three wheels.

"A lot of questions this year, but also specifically for this race, were around DAS and whether that contributed to the failure or not," said Vowles. "I can categorically say the answer is no.

"Next, Sainz also experienced a failure," he said, referring to McLaren driver Carlos Sainz, "and clearly, they are not using a DAS system on their car and a number of other competitors complained of the vibration that Valtteri was. This wasn't contained to us but clearly, we were on the worse side of the problem."

Looking ahead to this weekend, when Pirelli is supplying tyres a step softer than those used last weekend, he said: "We have a wealth of data available to us, but the compounds are going to go one step softer. We are going to go into Silverstone now eyes wide open.

"The reality behind it is that on Sunday, the Safety Car coming out as early as it did pushed all the competitors into that very long one-stop. People will be more cautious now and I am sure you will see a lot more two-stops, which may just be an effect of the compounds as well."