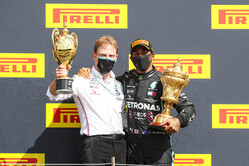 Mercedes driver Lewis Hamilton dominated the race from pole with a one-stop strategy, switching from medium to hard tyres under the safety car on lap 13. His front-left tyre went down on the final lap, for reasons that are still being investigated, but he still managed to win the race.

His team mate Valtteri Bottas and McLaren's Carlos Sainz also had tyre-related issues on the penultimate and final laps respectively.

Red Bull's Max Verstappen eventually finished second, having made a second stop at the end of the race to switch to the soft and claim the extra championship point for fastest lap.

Temperatures were similar to yesterday, with around 40 degrees of track temperature, following an exceptionally hot Friday.

The only driver not to stop during the safety car was Haas driver Romain Grosjean, who stayed out on his original set of medium tyres to gain track position. After 36 laps, he switched to the hard.

Mario Isola: "We'll of course be investigating exactly what happened to the tyres on the two Mercedes cars as well as that on the McLaren of Carlos Sainz in the final two laps of the race.

"What we already know for sure is that the tyres involved in these failures were extremely well-used, with nearly 40 laps of running; albeit some behind the safety car. The race was very much influenced by the safety car, with the second one prompting a pit stop for nearly everyone, leading to a very long second stint. After a complete analysis we will be able to understand fully what happened, which will obviously be very valuable information for next weekend."