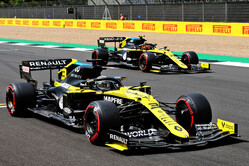 After yesterday's heat and strong wind, today's conditions at the British track were significantly cooler with a change in wind direction.

As a result of a hairline fracture on Friday, Daniel's chassis was replaced overnight ahead of the morning's FP3 session.

For Q1, both drivers took two runs on Softs tyres with Esteban progressing to Q2 in seventh and Daniel in eleventh.

Esteban's first run in Q2 was good enough for fourth with Daniel predicted to slot in narrowly behind his team-mate, only for a red flag to compromise his lap-time. With a clean lap, Daniel managed to be within 0.087secs of Esteban with both drivers through to the top 10 shootout.

An initial run on scrubbed Soft tyres put Esteban ninth and Daniel in tenth before Daniel found a decent improvement on his new set to leapfrog Esteban into eighth, with the Frenchman settling for ninth at the chequered flag.

Daniel Ricciardo: "I'm happy with eighth place today, especially in quite tricky conditions. It was a clean lap, no mistakes, nothing too spectacular, but good enough for eighth and just short of seventh. It was pretty close there with a few of us within half a second of each other. We've been in and around the top 10 all weekend, so we can be pleased with today's performance. Tomorrow's race will be interesting, especially in the battle for sixth or maybe fifth position. We're starting on the Softs, as are most people around us, so we'll see what we can do. Taking home good points is the target."

Esteban Ocon: "It's been a good qualifying overall. It was a very positive session, especially Q1 and Q2, where we were quite comfortable. We lost it a little bit in Q3, so we'll review what happened there. I'm happy with the progress from Hungary and we need to keep going. We seem to have better pace on Sundays, and qualifying has been the area where we've needed to find the most improvements. I think tomorrow will be good, we're in amongst the top 10 and we have a good opportunity for some decent points."

Alan Permane, Sporting Director: "It was a tricky session with the conditions as the wind was picking up between Q1 and Q2, which made it difficult and often unpredictable, especially in the very high-speed corners here. We're very happy to have both cars in Q3, of course, and we have promising starting positions on the grid. Now, we look forward to a trouble-free race tomorrow. Our race pace, as ever, looks very strong from our Friday simulations, so we will look to capitalise on our start positions and make sure we score decent points in the race."