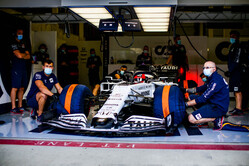 Pierre Gasly: "I'm happy with my Qualifying today! We had the pace for Q3 again and matching the lap time of Racing Point, which is at the moment one of the top cars on the grid, is really positive and it means we did a pretty good job on our side. Starting the race from P11 tomorrow gives us a free tyre choice and I think we have the chance for a good result in the race. We made progress since the start of the weekend so hopefully, we can finish within the top 10 tomorrow and bring home some points."

Daniil Kvyat: "My lap was really good and I'm quite satisfied with it. We changed a few things and I felt more comfortable in the car today, I had more confidence going through certain corners, which felt great, and the only place where I was losing a bit of time compared to Pierre was the straight line. I'm starting five positions further back due to my penalty, so I know it won't be easy tomorrow, but I generally feel strong during the race. I will push as hard as I can, as scoring points still remains my goal."

Jody Egginton (Technical Director): "What we learned yesterday and today in FP3 suggests that the new parts we have introduced at this event, combined with the new set-up direction investigated during Friday, have combined into an improved package here in Silverstone which both drivers are managing to exploit, and this is positive. However, the midfield is very competitive, so we need to continue on this trajectory.

"Q1 itself was as expected, we navigated the session without incident whilst Q2 was interrupted by a red flag when both cars were out for their first run. As such, there was only the opportunity for a single run at the end of the session, which wasn't ideal. Pierre set an identical time to Stroll on his final run but later in the session, so he qualified P11 and not P10, whilst Dany qualified 14th, but unfortunately has a 5-place grid penalty due to a gearbox change.

"Although in some respects it's disappointing not to make it to Q3, having one car in 11th position provides some extra strategy options, so we should feature in the midfield fight from lights out. As for Dany, we are probably going to have to be more creative to try and get him into the same position."