Hulkenberg talks of his "crazy 24 hours" 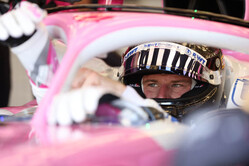 Unbelievably, Racing Point only officially confirmed Nico Hulkenberg as Sergio Perez' replacement at Silverstone, 3 minutes before the start of the session.

Asked about the chronology of events, team boss, Otmar Szafnauer explained: "Well, when I started thinking about this, when Checo's first test was inconclusive and hoping that the next test was negative but you've got to hope for the best and plan for the worst so we started that planning and we did it in parallel with Hulkenberg and Esteban Gutierrez at the same time.

"We also have Stoffel Vandoorne," he added, "but he couldn't be here this weekend as he's got a Formula E commitment so it was Esteban or Nico.

"We did it in parallel and our engineering team, after we discussed it, thought Nico would be more appropriate for our team because he knows us really well, he knows all the engineers, he knows our systems, our processes, he's driven our simulator. It would be easy for him to get in the simulator again and also he has relevant experience from having driven in Formula 1 last year, and we just needed somebody who could score points for us so we thought Nico would be the best guy for us.

"He had just landed in Germany," he continued. "I think he was flying to Germany to do some kind of sports car test or something, I don't know what category of racing, but he landed there and he said 'yeah, yeah, I just landed here, I'm going to do a test' and I said 'well, maybe you should jump in a Formula 1 car' and he said 'yeah, absolutely'.

"I think he spent an hour on the ground in Cologne to grab his boots and a helmet and I think the helmet he grabbed isn't to spec anyway and then he flew into Birmingham so he landed here, I think 7 or 7.30 last night."

"The last 24 hours have been a bit special, crazy and wild," he told Sky Sports. "At 4.30pm yesterday afternoon I got a call, took a plane here, seat-fitted until 2am, then at 8am this morning I was in the simulator for an hour, a bit of prep work. So it was a short night - but all worthwhile.

"I want to thank the team," he continued, "the night shift guys who did an amazing job to fit me in the car quite comfortably, and the FIA for turning it round so fast on the super-license. It's been very special."

Asked how it felt to be back in an F1 car, after it appeared that his time was over after losing his seat at Renault, the German said: "Even though I'm in pretty good shape, these kind of G-forces, especially around here, one of the fastest high-speed tracks, in 35 degrees... I got the best of everything," he smiled.

"I think my body will feel it tomorrow and the day after. It's obviously a huge challenge, but I'm not shy of that one."

Having never achieved a podium from 178 starts, some are tipping 'The Hulk' for a fairy-tale result on Sunday, but the German prefers to take the realistic approach.

"You see the huge potential, the car is massively fast," he said. "I think I got to grips pretty quickly with things. I tried to take it step by step, get up to speed with the car, understand it, it is quite different to last year.

"Every car, it just takes time to inhale everything, understand it, know how you have to drive it and learn. It's pretty quick around here nowadays."