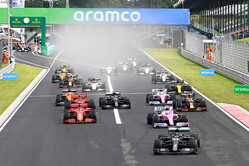 In a week McLaren confirms its partnership with former sponsor, Gulf Oil, it should be remembered that back in the day the team was one of several, like March, Lotus and Brabham that sold cars to entrants unable to build their own. Indeed, the right chassis, a Ford DFV and a Hewland gearbox and one was able to go racing with the big boys.

Though the sport now insists that teams build their own cars, during talks over the budget cap and the whole idea of reducing costs and levelling the playing field, not to mention the financial crisis caused by the pandemic, Red Bull's Christian Horner suggested that the big teams should be allowed to sell chassis to rivals.

F1's minnows "would save because you would just operate as a race team", Horner told the Independent in April. "You would have a limited development budget so you could quite easily operate, I would have thought very comfortably, at $80 million.

It "would be the cheapest way to address their issue, their plight, and the quickest way to be competitive as well," he added.

Surprisingly, at a time Ferrari was once again eulogising the need to maintain the purity of the sport's DNA, appreciating the financial crisis teams - indeed, the sport - were facing due to the pandemic, Mattia Binotto gave his support to Horner's suggestion.

"If the current emergency really put the existence of some of our competitors in this sport in doubt and made it necessary to revise certain cornerstones, then Ferrari would be open to it," said the Italian shortly after Horner's proposal.

"It's not even sacrilegious," he added, "given it's happened before in F1 and happens today in series such as MotoGP."

Three months down the line, and Binotto still feels that it is an idea worth looking at.

"During the COVID period, during the discussions as Ferrari we brought at least as a proposal to consider customer... the big teams, as we've eventually got in MotoGP for example, but that proposal was pushed back by the entirety of, let me say, the teams and F1 and the FIA, which we fully understand," he said, though it was actually Christian Horner who was championing the proposal.

"I think that has been a decision we all took together. Somehow, we decided that each single team should be independent, they should be capable of doing their own proper developments, I think they have the means now with the new Concorde Agreement and the regulations are sufficiently clear to do that. So yes, it will be great to have ten teams, ten different cars certainly on the grid."

The last time the concept of customer cars was on the table was in 2013, however Williams was vehemently against the idea. Indeed, a year later Claire Williams argued that customer cars are not "in the DNA of our sport", though her father had in fact first entered the sport using customer cars from the likes of Brabham and March.

In 2015, Toto Wolff said that "if we are able to keep all the current teams in the sport we don't need customer cars". However, he added that "I think we need to have a contingency plan in place for what happens if a team disappears."

"You would have thought now would be the time to put this through," said Horner in April, "but sometimes you can't save people that don't want to be saved."

Of course, given that company chairman, John Elkann has said that his team will not be in a position to challenge for wins until 2022, one wonders who might want to buy a Ferrari, be it the chassis or engine.

A Mercedes or Red Bull on the other hand...