Wolff "not involved" in Aston Martin talks with Vettel 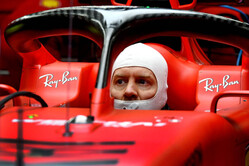 Toto Wolff, who owns a 5% stake in Aston Martin, says he is not involved in the talks between its F1 team and Sebastian Vettel.

Taking his stake in the company earlier this year in the wake of Lawrence Stroll's purchase of the British car manufacturer, Wolff was at pains to make clear that it was a "personal investment" and had no bearing on his involvement with Mercedes.

Following reports in the German media last week that Aston Martin is looking to sign Sebastian Vettel, the German subsequently admitted to having held "loose talks" with the team but that "nothing concrete" had been decided.

Asked if he was privy to those "loose talks" or had any influence in the team's driver line-up, Wolff was keen to make clear that he has no involvement.

"My shareholding in the car company is not related at all to the F1 racing team," said the Austrian. "I'm not involved in any discussions between Lawrence Stroll, Otmar and Sebastian.

"Obviously I know Sebastian very well," he added, "and I've been part of some, let's say, social gatherings, but no more than that."

Asked his opinion on the speculation, he said: "I think Checo is a very valuable part of the team, he has been a good driver, a known quantity for Racing Point. Sebastian, on the other side, is a four-time world champion that brings a lot of speed, a lot of engineering expertise, and an important marketing tool to the table.

"But in the end it will be Lawrence's decision what the best line-up will be for his racing team."

Talking of Mercedes and drivers... whatever happened to Lewis Hamilton's "dream move" to Maranello the British media was proclaiming last year?