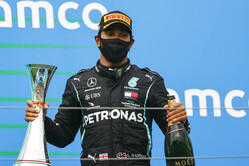 Rain before the start of the race influenced all the strategies today, with the grand prix getting underway on a damp track. Everyone went to the grid on the Cinturato green intermediate tyre, apart from the Haas of Kevin Magnussen on the blue full wets.

At the end of the formation lap, both Haas cars went to the pits for P Zero Yellow medium slick tyres. Their early switch meant that both Haas cars were running in third and fourth places throughout the opening stages of the race, after all the other drivers changed to slicks on a rapidly-drying track.

There were four different strategies in the top five places. Hamilton was the last of the frontrunners to stop, making a third and final pit stop for P Zero Red soft tyres, to chase the point for fastest lap. His team mate Valtteri Bottas, who finished on the podium, also made a third stop to try and get past Max Verstappen. The Red Bull driver was second with just two stops: despite crashing en route to the grid.

As the race started with wet-weather tyres, the rules no longer obliged drivers to run two different types of slick tyres during the grand prix.

Mario Isola: "The overnight rain that persisted into this morning washed away any rubber that had been laid down, so we had a green and slippery track for the start of the race, which was run in quite cool conditions. However, the surface dried quickly, which was pivotal to the strategy. Uncertainty over the weather remained though, which led some drivers to extend their stints, just in case they needed to switch to intermediates again. In the end, it stayed dry for the whole race and so we saw a certain degree of degradation on the front tyres in particular, which is to be expected in these unusual conditions. Most drivers stopped twice but some chose to stop three times, looking for extra performance to pass a rival or claim the championship point for fastest lap."