Hamilton storms to pole in Hungary 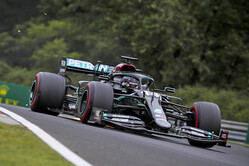 Yesterday's 'damp' second session offered hope that we might see someone other than a Mercedes driver on pole or atop the mini-podiums tomorrow.

Fact is that in the dry the Black Arrows are in a league of their own (again), though - as witnessed last weekend - they're pretty handy in the wet also.

Friday's opening session showed just how much of an advantage the W11 has, while this morning's session suggests that Racing Point could cause an upset for Ferrari and Red Bull. Indeed, Sergio Perez was only 0.161s off Valtteri Bottas' best.

Though there are some ominous looking clouds hanging around this afternoon, and the threat of even more such clouds tomorrow, it remains to be seen if the weather gods will smile on us once again, though it is doubtful that Lewis Hamilton will need to deliver the sort of performance witnessed seven days ago.

Even without the great leveller that is the rain, the midfield battle looks to be as hostile and unpredictable as ever, while George Russell continues to snap away at the back, desperate to get in on the action.

The Alfa Romeos and Haas' continue to disappoint - not helped by a power unit that is not delivering - while McLaren looks to be saving itself for Sunday again.

Ahead of Q1, the air temperature is 19.3 degrees C, while the track temperature is 29.4 degrees. It is bright, but those ominous clouds remain. Indeed, race control confirms that the chance of rain is 90%.

Traffic was an issue during the qualifying sims earlier and is sure to be a problem again in Q1.

Verstappen heads the queue at the end of the pitlane, ahead of the two Mercedes and Albon. In moments there are 16 drivers on track, all sporting softs. The Renault pair are last to emerge... a big gamble from the French team.

The Renaults head out as Verstappen is advised that the rain will hit T14 first.

Most stay out, but the Haas pair appear to be fuelled for just one lap and consequently pit.

Giovinazzi is yet to post a time. He had posted a time but it was subsequently deleted.

4th to 14th are covered by less than a second.

Raikkonen posts PBs in all three sectors but remains 16th.

Moments later Magnussen goes 15th but is instantly demoted by his teammate.

A difference of opinion between Hamilton and the pit-wall, as he is told to get his "delta negative". "I can't," he responds.

"I have a problem with the power unit," reports Gasly, who missed FP1 with a sensor issue.

With 4:00 remaining, the Points head out on fresh rubber.

Perez goes quickest in S1, while Russell goes third overall with a 15.585. Where did that come from?

Phew! We lose Magnussen, Kvyat, Grosjean, Giovinazzi and Raikkonen, while both Williams drivers make it to Q2.

With some of those 'near misses' in Q1, it's entirely possible we're going to see some big names fall by the wayside in Q2, not least a Red Bull or Ferrari driver.

"You have to check my engine mate, it's all over the place," warns Verstappen ominously.

Man of the moment Russell is first out for Q2. Shortly after he is followed by Stroll, Perez and Ocon.

Meanwhile, the stewards are looking at an earlier incident involving Sainz and Giovinazzi.

Soon all but Gasly are on track, a mixture of mediums and softs.

"It's so weird, now I'm understeering everywhere at medium speed, I don't know what's going on with the tyres," complains Verstappen. Teammate Albon is unhappy that he was sent out behind the Ferraris.

"I feel I am destroying the engine," sighs Gasly. "We cannot fix the problem in this session," he is told, "we have to live with it."

Ahead of the final assault, the Points need to re-think, they posted their best times on mediums and have now slipped to 7th and 8th. To add to the conundrum, Stroll is called to the weighbridge.

Perez sticks - no pun intended - with mediums, as does Stroll. A big gamble from the Silverstone-based outfit. Everybody else is on softs.

Norris posts a PB in S1, as does Ricciardo.

Stroll improves to seventh while Hamilton, having gone quickest in the first two sectors, backs off in the third in order that his fastest lap - set on mediums - remains.

So, Mercedes and Racing Point will both start the race on mediums, the only teams to qualify on the yellow-banded rubber.

In case you were wondering... those ominous clouds remain, so the weather gods might yet have some fun and games.

Stroll is first out, followed by Vettel, Hamilton, Leclerc and Bottas.

Stroll and Hamilton trade fastest times in S1, and again in S2.

Verstappen posts 14.849 to go fourth, ahead of Norris, Sainz, Vettel and Leclerc.

While Perez has yet to post a time, Gasly is going for the one run.

"That's it for us," sighs Verstappen. "Just hang fire," he is told. A problem with the Red Bull?

Stroll, Vettel and Leclerc head out for their final attempt. Perez follows.

With less than 3 minutes remaining, Hamilton, Bottas, Stroll and the rest head out.

Vettel says he lost time due to drizzle on the track at T1.

All eyes on the Mercedes pair.

Hamilton fails to improve in S1, while Bottas posts a PB.

In S2 Hamilton goes quickest, while Bottas posts another PB.

At the line it's 13.447 for Hamilton, with Bottas only managing 13.554 - though the use of the word 'only' seems wholly inappropriate.

Stroll retains third and Perez fourth, ahead of the Ferraris and Verstappen.

So, Hamilton is on pole, ahead of Bottas, Stroll, Perez, Vettel, Leclerc, Verstappen, Norris, Sainz and Gasly.

While the front row isn't a surprise, what follows is, especially as the two points will start the race on mediums.

Vettel did well to out-pace his teammate, the German a top five qualifier here since 2008.

Right from the outset it's been a difficult weekend for Red Bull, and there's a real sense of heads beginning to drop. Then again, this hasn't been a good weekend thus far for Honda.

Both McLarens are in the top ten, which suggests we could be in for another double points finish tomorrow, the Woking pair likely to be battling with the Bulls and Ferraris.

The weather gods didn't come out to play this afternoon, one wonders if they're saving up their fun and games for race day. Judging by the pace of those Black Arrows we can only hope.