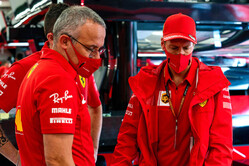 While the gods have looked down favourably on Ferrari over the years, not least 1988, when, against all odds, it scored a 1-2 at Monza just weeks after Enzo Ferrari's death, the only race that season not won by McLaren, it cannot expect a similar result at Mugello in September when it contests its 1000th race in the Formula One World Championship Grand Prix at its own track, Mugello.

Leaving aside last week's silliness that saw both cars eliminated after just 4 laps, the fact is that the SF1000 - named in honour of the forthcoming milestone - is a dog, and rather than battling Mercedes and Red Bull, Charles Leclerc and Sebastian Vettel are likely to spend the season attempting to keep pace with McLaren and Racing Point... and possibly others.

Speaking ahead of this weekend's race, neither driver was able to offer much hope.

"Realistically, we are struggling with the performance at the moment," said Leclerc. "I don't think we can consider ourselves fighting for podiums at the moment, but we will try to change that and we are working as hard as possible to try and change this.

Of course, last Saturday's weather conditions and the problems that followed on Sunday, didn't allow the drivers to really judge the updates that had been brought forward, nut nonetheless the outlook isn't positive.

"We know that the parts have worked," said Vettel. "We would have liked them to be obviously a game changer, but it doesn't look at this stage, like that.

"Then again we have to confirm them in real race conditions," he added. "So I think it will be interesting and we are excited about seeing where the car will be tomorrow and then especially in the race.

"The team has a lot of experience, we know coming here what this track is about, the tyres and so on, so I think we will get the final confirmation this week."