Hamilton intended to "take a risk" in Bottas battle 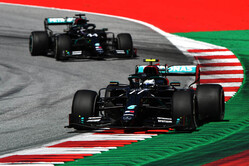 Demoted to fifth on the grid after Red Bull presented the stewards with fresh footage of his Q3 misdemeanour, Lewis Hamilton had worked his way up to third by lap 10 having passed Lando Norris and then Alex Albon. Moments later he progressed to second when Max Verstappen retired.

Despite the opportunities offered by the numerous safety cars over the course of the afternoon, Mercedes stuck to its one-stop strategy, having double-stacked the pair when the first safety car was deployed following Kevin Magnussen's retirement.

Putting both drivers on hards, Hamilton queried the move, believing he should have been put on a different compound to his teammate.

Aware that his tyres had to last him until the end - Mercedes having to cope with the various events that were beginning to turn the race on its head and the gearbox issues which threatened "instant kill" to both cars - Hamilton decided to adapt his own strategy.

"I don't remember which lap the safety car came out but it was unfortunate for sure because I was closing down Valtteri during that period," said the world champion. "It was just at the time when he was really starting to fall off the cliff with his tyres, and I could see the gain that I was having each lap. It was getting quite exciting because I needed to get him as close as possible but then the safety car came out and obviously that put a spanner in the works. But that's racing.

"At this track, in order to have an opportunity to pass the car in front you always want to go for the opposite strategy," he continued. "When you're in a team like ours, the first car always gets the priority in the stop, and so if you both come out on the same tyre it's pretty much... you need something like 0.8s advantage against the car ahead in order to have an opportunity at fighting with them.

"So I knew that on the same tyre I would most likely be finishing behind, but then obviously the safety car came out and that really messed with things because I was planning to try and extend my stint as long as I could, then stop for the opposite tyre and just take a risk.

"Ultimately when I'm behind that's what I like doing, taking a risk, but it didn't work out that way and I don't think it was a big issue. There were so many other things that came into play."