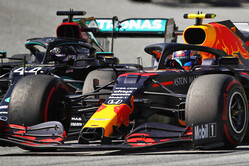 It wasn't the best of days for Lewis Hamilton.

Just ninety minutes before the start of the race he was summoned by the stewards after fresh video evidence came to light following the incident during Q3 when he failed to slow for the yellow flag that was waved in the wake of Valtteri Bottas' off.

Having escaped punishment the first time around, on review the stewards handed the world champion a 3-place grid penalty which meant he would start from 5th.

A tough race, which saw him in a cat and mouse battle with Bottas, was compromised by the numerous safety car deployments and the anxious calls from the pits to avoid the kerbs, all of which meant that in the closing stages rather than focussing on his teammate, Hamilton was battling to hold his own position.

In the moments after the final safety car of the day, Hamilton was fending off Alex Albon, and as they entered Turn 4 the Thai driver attempted to go around the outside. The two cars touched sending the Red Bull into a spin.

According to the stewards, video evidence showed that Albon and Hamilton were side by side approaching the apex of turn 4. They negotiated the turn side by side, but Albon had a better exit and was in the process of passing Hamilton.

Hamilton was drafting to the outside at the exit and consequently made contact with the rear right wheel of the Red Bull, causing Albon to spin.

The stewards determined that Hamilton was predominantly to blame for the collision, and handed him a 5s penalty that dropped him from second to fourth.

"The stewards are always in a difficult position to take the right decisions," said team boss Toto Wolff after the race. "I think today was a bad day for Lewis and a bad day for the team.

"Obviously the three grid position penalty that he got in the morning, with Red Bull digging out a different camera angle, you have to take it on the chin," he added. "Then in the race, I would definitely say, from my perspective, the 5 seconds were too harsh.

"We looked at the video now a couple of times," he continued. "Lewis was having full lock in the corner. Albon had about 40% of the road left to make the corner and it was different to lap one, where Lewis had to back out of Albon pushing Lewis.

"So in my opinion, not justified. But I recognise the complexity of the job, of coming up with the right decisions. Some go for you, some go against you."

"The pass was made," countered Red Bull's Christian Horner, "it wasn't like it was on the entry or whatever.

"What overtake is safe at the end of the day?" he added. "I doubt Lewis was going to wave him past. We had to use that grip advantage and the grip is in the corners. He'd done that. It was just a misjudgement for Lewis at the end of the day, and it'd be good if he apologised for it."

"It was a really unfortunate situation with Alex, I can't believe we came together again," said Hamilton, referring to their late clash in Brazil, which also ended in the Thai driver spinning out following a clash with the Briton.

"It really felt like a racing incident," he added. "But either way I'll take whatever penalty they feel I deserve and move forward."