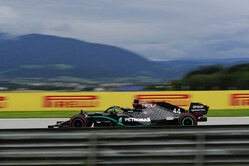 Race stewards in Austria have deemed that no further action was required after investigating two incidents involving Lewis Hamilton in Q3 today.

The Briton was summoned by the stewards after it was alleged that he left the track in turn 10 and subsequently failing to slow for yellow flags that were being waved between turns 5 and 7 following teammate Valtteri Bottas' off.

Speaking after the session, in which he finished second to the Finn, Hamilton said: "I came around turn four and I think there was a big puff of dust and I didn’t know where the car was or anything like that but I managed to see that Valtteri was just about to come back on the track. Fortunately it didn't really affect the lap, and he kept his position and so did I."

Having heard from Hamilton and reviewed video and telemetry evidence, the stewards said that Hamilton mentioned that he passed a green light panel in turn 5.

The video footage confirmed that there had been yellow flags and green light panels at the same time and therefore conflicting signals were shown. Taking this into account, the stewards decided to take no further action.

In terms of exceeding the track limits, though Hamilton did indeed run wide and his time was deleted, however as it was slower than his best time he remained second.