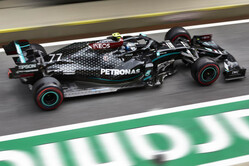 Having led a Mercedes 1-2 in all three practice sessions, Lewis Hamilton must head into the afternoon - and tomorrow afternoon - as red hot favourite. However, it is what happens behind that is going to be of real interest.

Having carefully avoided the kerbs today, Max Verstappen was able to show what the Red Bull can do, while teammate Alex Albon gave a good account of himself.

Usually we would be mentioning Ferrari here - or Red Bull if the Maranello outfit had out-paced it - but instead we have Racing Point, after Sergio Perez posted the fourth best time in FP3. With teammate Lance Stroll eighth, effectively best of the rest, it would appear that the pre-season fears of McLaren and Renault have been realised.

Needless to say, the stewards, who were kept busy last night thanks to Red Bull, are going to have plenty to occupy them should the pink cars cause an upset over the next hour.

It's been negativity all the way since Ferrari arrived in Austria, and based on its performance thus far it looks set to continue. One would like to think that the Maranello outfit is sand-bagging - if only to provide some hope that Red Bull might be challenged - but that really doesn't appear to be the case.

The midfield - in which we do not currently include Racing Point - looks to be as tight as expected, with McLaren, Renault and AlphaTauri all looking strong, while it looks as if the battle to get into Q2 will feature George Russell, the Alfas and Haas duo.

Remember, with another race here next week, and Ferrari not updating its car until Hungary, what we witness today (and tomorrow) will probably set the tone for the opening phase of the season.

Also, following Latifi's off this morning, and the numerous incidents yesterday, it's worth noting that spares - never mind rebuilds - are going to be in short supply over the weeks that follow, especially given the intensity of the schedule which is unprecedented in the history of the sport.

The lights go green and Latifi is first out, the Canadian having missed around 30 minutes of this morning's session. He is followed by the Alfa pair.

More drivers head out, including the Red Bull and Ferrari duos.

Perez goes third with a 4.543, ahead of Vettel, Norris, Gasly, Albon and Stroll.

As the Mercedes pair head out, only the Renaults are yet to show.

As Norris goes quickest in S1, the Mercedes pair are posting PBs in the first two.

Bottas goes fourth with a 4.553, while Hamilton can only mange a 5.071 after appearing to back-off in the final sector.

Of course, being such a short lap traffic is always a problem here.

Magnussen complains of being held up by Leclerc (?!?), as Norris fails to improve. No such problems from Hamilton who goes second with a 4.435.

Stroll and the Williams pair are first out for the final run.

As more drivers head out, Stroll goes quickest with a 4.309.

A mistake costs Ricciardo, the Australian dipping a towe in the gravel. Raikkonen fails to improve.

So, Verstappen is quickest, ahead of Bottas, Hamilton, Stroll, Leclerc, Sainz, Perez, Vettel, Ricciardo and Gasly.

We lose Magnussen, Russell, Giovinazzi, Raikkonen and Latifi, Grosjean making it by the skin of his teeth.

The lights go green for Q2 but it is several minutes before there are signs of life.

Indeed, the first car (Bottas) heads out with 11:37 remaining, teammate Hamilton right behind.

They are soon joined by Stroll, Leclerc, Sainz and Vettel.

Verstappen heads out, the only driver running the medium rubber at this stage.

Bottas posts 3.530 but this is instantly eclipsed by Hamilton who crosses the line at 3.325.

Norris posts 3.940 to go third, ahead of Stroll, Leclerc, Verstappen and Sainz.

Perez goes fifth with a 3.982, as Albon is the only driver yet to post a time.

To clarify, the Mercedes pair are quickest, ahead of Norris, Stroll, Perez and Ricciardo.

Yes, you read that correctly. Leclerc is currently seventh, ahead of Verstappen, Sainz and Vettel. That said, the Dutchman is on mediums.

A mistake means Albon can only manage 13th, the Thai crossing the line at 4.464.

Stroll is first out for the final run, the clock showing 3:28 remaining. Currently, Gasly, Kvyat, Albon, Ocon and Grosjean comprise the drop zone.

As Stroll begins his flying lap more drivers head down the pitlane.

Bottas and Hamilton both look set to improve, as do Vettel and Sainz.

Ocon fails to make the cut while Bottas goes top with a 3.015.

Albon goes third with a 3.746 which drops Vettel into the drop zone. A scrappy lap from the German, likewise, Verstappen. That said, the Red Bull driver posted his best lap on the mediums so he will have an advantage tomorrow.

"That's crazy," declares Leclerc when told of his position.

"Let's keep working guy," urges Grosjean, "this is only the first one." The Frenchman is advised that he was just five-hundredths off Ocon's time.

Bottas leads the way as the lights go green for Q3. He is followed by his teammate, Norris, Perez and Sainz.

Hamilton is quicker in S1, but Bottas has the advantage in S2. At the line the Finn posts 2.939 while the world champion can 'only' manage 3.061.

Norris pits without posting a time, while Verstappen goes third, ahead of Albon, Sainz, Perez and Leclerc.

Stroll and Ricciardo have not gone out and appear to be looking at just one run.

A misunderstanding between the McLaren pair causes a traffic jam in the pitlane, Norris ending up at the back in the process. Ricciardo heads out for his sole run.

Perez posts a PB in S1, as does Leclerc.

Out come the yellows as Bottas runs wide in T5, taking a long, long run through the gravel and even manages a spin, which causes issues for those running behind.

Hamilton improves to 2.951 but remains second, while Bottas holds on to pole.

Verstappen will start third, ahead of Norris, Albon, Perez, Leclerc, Sainz, Stroll and Ricciardo, who will be disappointed with his one run which was compromised by Bottas' off.

Perez posted exactly the same time as Albon, but the Thai driver posted his first. If not, the Mexican would have been fifth.

While Vettel insists that the Ferrari is always good in race-spec - and let's face it, race-spec is qualifying-spec because "thems the rules" - this result is a nightmare for the Italian team and its fans.

Leclerc is seventh, 0.984s off Bottas' pace, but also clearly struggling against the McLarens and Points.

Indeed, other than the works Ferraris, the customer teams were also off the pace, which is not good when you consider that there will be no engine updates this year.

"An amazing job by the team," says Bottas, "it's very impressive. I'm so impressed so thanks everyone in the team. It's a truly amazing car to drive."

"Great job by Valtteri," adds Hamilton, "this is a great start to the season. "We're always pushing the boundaries," he continues, "there isn't any politics within the team, it's united."

"It should be warmer tomorrow," says Verstappen, "which should play to our advantages. I expect we are a bit better in the race, and I'm the only one on a different tyre in the top ten. I'm going to try and make it as difficult as possible for them."