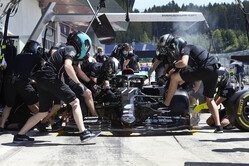 Once they hit the track it was as if they'd never been away, though, courtesy of the absence of spectators, there were times when the whines from certain team bosses drowned out the sound of the engines.

As Sergio Perez went best of the rest with the Racing Point and McLaren looked on with interest, at Red Bull, it appears that the protests that might have marred the season opener in Melbourne might yet take place.

The Austrian team is unhappy with Mercedes dual-axis steering (DAS) system, which the German team used in this morning's session and intends using in the race.

Though the system has the approval of the FIA, which has since admitted that it was surprised when the German team was able to build the device despite the restrictions that had been imposed, Red Bull is seeking clarification from the governing body in terms of the parc ferme rules that strictly limit the changes that can be made to a car's set-up once qualifying is underway.

"We'll wait to see if it is fitted to their cars," Horner told Sky Sports F1.

"Obviously it's a complicated system, it's a clever system," he admitted, when asked if his team would run its own version.

"We're after some clarifications from the FIA, and start raising some questions about it. It depends what it actually does and achieves. Everything has to earn its place on the car, these rules are so complex, it's just understanding which parts of the regulations it fits."

Any protest, be it relating to Mercedes DAS system or the similarity of the Racing Point to last year's championship winner, will come after the end of Sunday's race.