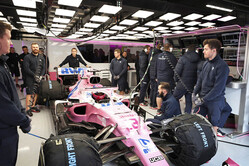 Racing Point technical boss, Andrew Green says that coronavirus protocols being introduced at races will compromise the teams in terms of engine changes and car rebuilds.

Along with the mandatory protective clothing, and maintaining social distancing wherever possible, the number of engineers and mechanics working on the cars has been reduced, as a result the days of rebuilding a car or changing the engine during the lunch break could be over... for now.

"It's very different and it's going to be a real challenge going forward," said Green according to Reuters, following this week's filming day at Silverstone.

"Jobs now take a lot longer, and we have to try and manage that," he added.

"I suspect changing an engine now will take quite some time," he continued. "We can only have certain members of the crew working on the car at any one time, and that does limit the speed in which you can do a power unit change.

"When we get into the real meat of the car, and centre around the power unit, we're probably looking at, in some cases, it taking twice as long."