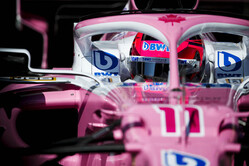 While Mercedes enjoyed almost unlimited running at Silverstone on Tuesday and Wednesday, with both Valtteri Bottas and Lewis Hamilton in action, this was because the Brackley-based outfit ran its 2018 car.

Racing Point will be on track at the Northamptonshire venue next Wednesday when it will run its 2020 contender, which, ironically, attracted much attention during pre-season testing due to its similarity to the 2019 Mercedes.

The Silverstone-based squad is taking advantage of the rule which allows teams to complete two days of running - limited to 100 kms each day - for promotional filming purposes.

Having used one of its filming days in February, ahead of pre-season testing, Racing Point still had one day available.

While Ferrari is in action this week, a number of other teams have yet to confirm their pre-Austria plans, though McLaren is stymied by the fact that it doesn't have the requisite chassis-power unit package available.