No pre-Austria test for McLaren 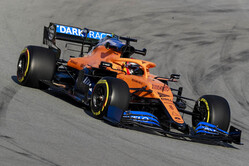 While Mercedes and Ferrari have both confirmed that they will carry out private tests before next month's season opener in Austria, though a number of others are set to follow suit McLaren will not be among them.

"Unfortunately we don't have this possibility of having a car that is two years old that we could operate because of all the powertrain switches we had here in recent years," team boss, Andreas Seidl told Sky Sports.

"But as you have seen already, Lando was doing some karting and the free (F3) testing, and we look into the same thing also with Carlos to have the drivers ready," he added. "Of course, we will do some simulator work as well with them."

In terms of preparing the team for next month's back-to-back races in Austria, he said: "We started the race team again last week so we are preparing the cars at the moment and to try and to go through a lot of procedures and processes in the garage under these new circumstances with all the social distancing etc.

"With what we know now with the process that has been outlined from FIA and Formula 1 in terms of how we actually execute the race weekend in Austria, we have clarity there," he added.

"Now it's simply important to focus on preparation in the next three four weeks and then hopefully we have a good start in Austria."