Ricciardo: Reverse grids could be messy 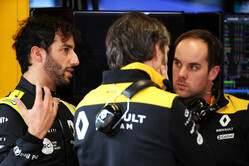 With Mercedes having vetoed the move to introduce reverse-grid qualifying races at some events this year, F1 managing director, Ross Brawn subsequently admitted that he wished the German team could have taken a "bigger view".

Amidst fears, echoed by Christian Horner, that back-to-back races at the same track within days of one another will effectively produce the same result, Daniel Ricciardo says that while he can understand some people's desire for reverse-grid he fears they could "make things a little messy".

"I'm not always old-school," he told the official F1 website, "but I guess it's not really the first on our priority list of things to change in the sport.

"I can see how some fans would be like 'yeah, it would be great to have the fast guys trying to come through the field' and all of that," he admitted. "I see that point of view.

"But there are a lot of scenarios where it wouldn't work, and it would make things a little messy.

"I can see why from a couch potato point of view, as I am right now, it could be exciting," he added. "But I think from a purist and a real racing point of view, I don't think we need to go there just yet. That's the best way to say it."

Asked about his decision to join McLaren, he said: "It wasn't easy... it was not an overnight decision.

"I guess I would just say this whole year's been weird," he added, "and continues to be weird. Having a lot of time to think about things like the future was good, but then it was also sometimes not easy because you've got all this time but not much action, I guess. That was certainly difficult.

"The whole year has been crazy for things, even beyond coronavirus now, that making these decisions with only testing to go by this year, that wasn't easy.

"For sure ideally you'd race, you'd get going and you kind of make your mind up, but we're not in those times now with that luxury.

"Now we can get going and absolutely, I'm hanging out obviously to race, to compete but[also to finish this journey and this chapter off with Renault in the best way possible," he added. "I still feel like I owe a lot to them on and off-track so I'm glad that we can compete soon and try and do what I can."