Brazil GP to go ahead with spectators? 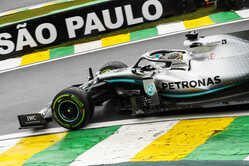 To date, with 29,341 fatalities, Brazil is fourth to the US, UK and Italy in terms of deaths as a result of the coronavirus pandemic.

However, while there are signs of the virus easing off throughout much of the world, there are fears that the South American nation, second only to the US in terms of recorded cases (514,992), has yet to see the worst.

The epicentre is Sao Paulo and yet despite having 20% of the country's cases of the virus is today allowing shops and malls to reopen following two months of loosely enforced lockdown.

Despite the numbers, controversial president, Jair Bolsonaro has consistently played down the virus, arguing that the consequences of lockdown are worse than the consequences of the virus itself. Indeed, despite the terrifying numbers, Mayor Bruno Covas claims that the city has met all the state's criteria to move forward on relaxing restrictions.

Later this week F1 is due to announce the revised schedule for the 2020 season, and while it is expected that initially only dates for the European events will be confirmed, it is understood that when the full calendar is revealed Brazil will be the penultimate event

While the European events will be held behind closed doors, without spectators, it is anticipated that a number of the flyaways will sees fans in the stands.

Among those is the race at Interlagos... in Sao Paulo.

"Preparations for the Brazilian Grand Prix are on schedule," organizer Tamas Rohonyi tells Forbes, "and we are certain that the famous Interlagos circuit will be the stage of yet another fascinating race.

"The event will be run under the existing contract without difficulty," he adds. "We expect confirmation of the November date by the FIA to put tickets on sale like the other flyaway races."

Last year's event attracted 158,213 fans, and though shortly after buying the sport in 2017 F1 boss Carey Carey admitted that changes to the event's contract would have an "adverse financial" impact , Brazil remains a vital market for the sport.

The country's broadcaster TV Globo - in the final year of its current contract - is in negotiations with F1 to arrange a new one, with Brazilian news organization UOL claiming that the new deal would have to allow F1 to stream races online. With 80 million F1 viewers, Brazil is the sport's highest TV audience, consequently there is a lot to play for, and with TV Globo putting $35m into the pot year after year, F1 will need to carefully weigh-up its options.

Likewise Interlagos, which is in the final year of its contract, for while there has been talk of the race moving to Rio de Janeiro, a proposal backed by Bolsonaro, the Sao Paulo track is highly popular with fans and drivers alike and rarely fails to produce a memorable race.

In the meantime, much like the shops and malls in Sao Paulo, Rohonyi insists that Interlagos is open and ready for business, all he needs is confirmation of the date of the race, for the longer the issue remains unconfirmed his operating (selling) window is narrowing.