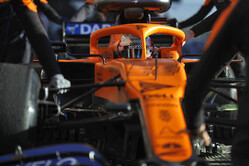 It would appear that the decision for Ferrari and Sebastian Vettel to part company is not quite what it seemed, as Carlos Sainz reveals that he was approached by the Italian team over the winter break.

Just weeks ago, Sebastian Vettel, insisting that money was not an issue, said that talks with Ferrari were continuing and that a new contract could be in place before the start of the season.

However, talking to the official F1 website, Carlos Sainz has revealed that he was first approached by the Italian team some time ago.

"Believe me, the moment I heard that I went to ask permission from Zak to go and talk to them in a more serious way," he added. "And without knowing what Zak's reaction was going to be, he immediately came to me and said, 'look, it's an opportunity, go and talk to them and see what they're about'."

Asked how the Woking team reacted when he agreed the move, Sainz said: "They were happy for me. They congratulated me. They said: 'You deserve it and I'm sure you will do great there', and that confidence boost is always nice to hear from your bosses.

"The key to this process has been the clarity and the openness of all parties involved to make it happen," he continued. "That makes me incredibly proud and the way it has all been managed makes me feel very happy and very thankful to Zak and his team."

When asked what Ferrari is getting from its new driver, the Spaniard said: "They are going to find an extremely hard working guy, that will go to Italy, will spend a lot of time in Maranello, the same way I spent a lot of time at McLaren.

"Apart from that, hopefully a very quick driver and a an incredibly motivated guy that is going to give it all for the Scuderia."

However, in the meantime he remains a McLaren driver, and the Spaniard is keen to build on the form witnessed in 2019.

"I'm keen to say goodbye to McLaren in the best possible way," he said. "So believe me I'm going to give my best this year the same way I was giving my best last year."

In terms of Ferrari, the news that it was already making plans for Sebastian comes as no surprise. Despite winning 5 titles for the Scuderia, Michael was shown the door as the team ushered in rising star Kimi Raikkonen, who was himself subsequently eased out in favour of Fernando Alonso who in time gave way to Vettel. It is the nature of things in Maranello.