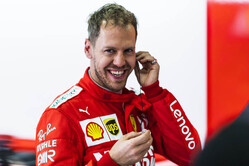 As speculation over Sebastian Vettel's future continues, Bernie Ecclestone - a good friend of the four-time world champion - believes the German should head to Mercedes to partner Lewis Hamilton.

It's understood that Daimler is keen on the idea, and Toto Wolff has admitted that it would be "good marketing", but other than the fact that Hamilton appears to prefer having Valtteri Bottas in the second car there is still considerable doubt as to the future of the Silver Arrows.

Nonetheless, aware that the sport is clearly going to struggle the longer the threat from the coronavirus continues, and even beyond, Ecclestone believes pairing Vettel with Hamilton would be good for everyone.

"I think both of them get along with each other without any problems," he added. "It's not a case of what their egos are, both have super talent. So it would make a super, super team.

"I don't see any problem with Lewis being concerned at all and I know Sebastian would love to have the opportunity to race against him."

Asked why he thought the four-time champion had never come anywhere near to achieving the success of his great hero, Michael Schumacher with the Italian team, Ecclestone is in no doubt.

"Michael's situation with Ferrari was a little bit different," he said, "I once said to him, 'who's running the team?' He said 'I am'. That's probably the truth, why they're so successful.

"The trouble with Italians, they haven't really got a lot of leaders," he continued, "they haven't got a leader in my opinion. The person in charge of the team is basically a super engineer, he's been with Ferrari for more than 20 years."