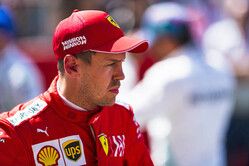 Christian Horner has poured cold water on speculation that Red Bull might bring its four-time champion, Sebastian Vettel back into the fold and partner him with Max Verstappen.

While such a line-up would have the fans - and no doubt young Max - salivating, Horner doesn't believe it would work for the Austrian team.

"I think it's enormously unlikely," he told Sky Sports. "We have a long-term agreement with Max and Alex is doing a good job.

"We've got a good dynamic within the team," he added.

"Experience shows that two alpha males, it doesn't tend to pan out well," he continued. "Sebastian is still a very competitive grand prix driver. I don't think it would be conducive for our team to have two alphas. We're happy with the driver line-up we have.

"I'm sure he's not short of options moving forward, but he's chosen that it hasn't worked out for him at Ferrari."