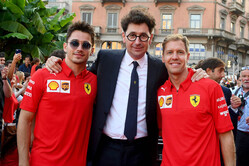 During pre-season testing it seemed ironing out a new deal with Sebastian Vettel was merely a matter of crossing some Ts and dotting a few Is, and though there might be a couple of sticking points such as salary and equal status with his precocious young teammate, it was widely thought the German would remain at Maranello for at least one more year.

Though over the last couple of seasons there were times the German appeared weary and ready to throw in the towel, heading into the season he appeared to have regained some of the spark that had previously been missing.

Then came talk that Vettel was unhappy with the money on offer, and though Lewis Hamilton was no longer linked with the Maranello outfit, speculation began to build linking a number of drivers with the German's seat.

Even then however, Vettel claimed all was well, that a new deal would probably be agreed before the season got underway and that money wasn't a motivator.

All that changed in the early hours of Tuesday, when, alerted no doubt by the four-time world champion, the German media reported that Vettel was parting company with the Italian team,

Speaking at the Motor Valley Fest Digital, Mattia Binotto explained the reason for the split.

"Over the last weeks the world has changed," he said, "not only from an economic point of view but also from a technical and sport point of view.

"There are challenges and obstacles that are going to be difficult," he added. "We are laying the foundations for the future. And we want to have a specific perspective.

"We discussed with Sebastian and we found out we didn't share the same goals, short or long term goals," he said. "Sainz is a great addition, he is smart, young, he has participated in five seasons, he is a strong, reliable pilot that conquers many championship points during races and I believe for us he is a great pilot to be paired with the pure talent of Charles so he can grow and win."

Nonetheless, in just a couple of seasons, the Italian team has gone from having one of the sport's most experienced line-ups to one of the most in-experienced, and while Leclerc has two wins under his belt, Carlos Sainz has only made it to the podium once.

"When taking these decisions it's because we are convinced we made the right decision," said Binotto, "we close the cycle with Sebastian. It's been six years since Sebastian has been working in our team, I admire Sebastian, I admire him as a person and as a professional, I hold him in great esteem."