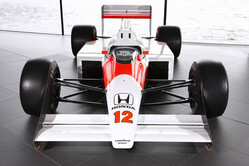 On the same day that McLaren announced it had signed Daniel Ricciardo on a multi-year deal - the Australian having been on Ł20m a year at Renault - it was revealed that the Woking-based company is seeking to borrow against its collection of historic race cars and its factory (sorry Ron).

Having allegedly been turned down by the Department for Business, Energy and Industrial Strategy for a loan of Ł150m in recent weeks, the company, which was the first to take advantage of the taxpayer-funded furlough scheme, is understood to be looking to raise Ł275m against its historic collection and the MTC (McLaren Technology Centre).

"Like many other British businesses McLaren has been severely affected by the current pandemic," a spokesman told Sky News, "and we are therefore exploring a variety of different funding options to help navigate these short-term business interruptions."

According to Sky News, McLaren has been advised by JP Morgan that it could raise the money by releasing new bonds with funding secured either from existing or new bond holders.

The move comes weeks after it was revealed that Williams had secured a loan of at least Ł50m from Michael Latifi, the security for which not only included its historic collection but the factory and pretty much everything else.

Indeed, it was Latifi who came to McLaren's rescue in 2017 when it needed Ł275m to pay off Ron Dennis in lieu of his 25% stake in the company.

"McLaren Racing Limited has a collection of heritage vehicles, made up of 152 racing cars, 4 F1 road cars, 4 historic vehicles and 20 spare F1 racing car monocoques," said the company in its financial filings in 2018. "The collection is held in several locations; at the McLaren Technology Centre, most of which is on display to visitors and employees; on display at Donington Park Race Circuit; at McLaren Automotive Dealerships; and the remainder is held in secure storage. These assets are held on the balance sheet at cost.

The news that the team, Britain's most successful in terms of drivers' titles, needs upwards of Ł275m, just weeks after receiving a Ł300m cash injection from investors, and is willing to risk its history and its facility must be considered extremely worrying, and adds credence to the recent claims from Zak Brown and Andreas Seidl.

The privately owned company's biggest shareholder is Bahrain’s Mumtalakat sovereign wealth fund, which holds a stake of 57.7 per cent, while Michael Latifi holds 10% and the Saudi TAG Group holds 14.7%.