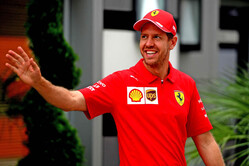 With talk of Lewis Hamilton joining Ferrari dominating the headlines for much of the winter, it must have come as something of a surprise yesterday when Mercedes and Sebastian Vettel became the subject of speculation.

Though talk of Hamilton heading to Maranello has all but died down, the Briton making it clear that he has no intention of heading there anytime soon, the fact is that he is out of contract at season end, as is his teammate, Valtteri Bottas.

Aware of the inevitable speculation, team boss, Toto Wolff, sought to downplay the situation before it gets out of control.

"Sebastian is a great driver, a major personality and an asset to any team," said the Austrian. However, he quickly added: "When looking to the future, our first loyalty lies with the current Mercedes drivers.

"But naturally we must take this development into consideration."

At a time some believe that Vettel, who at times over the last two years appeared to be no longer enjoying himself, may take the opportunity to walk away from F1, others feel that the challenge of a new team could help rekindle his love for the sport.

However, one cannot help but feel that the Vettel / Ferrari situation is a form of smoke and mirrors, detracting from the real story that is slowly building behind the scenes.

Despite the positive talk from the various involved parties in recent weeks, we have yet to learn the future plans of Mercedes - certainly in terms of majority shareholder Daimler-Benz - Wolff himself, Hamilton or his teammate, Bottas.

Indeed, events at Brackley (and Dadford Road) in the coming months could well totally overshadow talk of who gets the seat alongside Charles Leclerc at Ferrari.