F1 to be exempt from new UK quarantine rules? 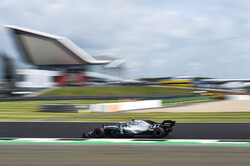 While the country tries to decipher last night's speech by UK prime minister, Boris Johnson, though it remains unclear whether the nation is still under lockdown it does appear that from the end of May all travellers arriving in the UK (by air) would need to undergo two weeks of mandatory quarantine.

Such a move would be a blow to F1's hopes of staging the British Grand Prix on 19 July, just seven days after the proposed second race at the Red Bull Ring.

However, British tabloid, the Sun, reports that "top sportsmen" would be exempt from the new rule.

According to the tabloid "football and motor racing chiefs are locked in discussions with ministers to allow them to come and go more freely from abroad".

Though nobody is directly quoted, the Sun claims that "senior government figures have agreed sports stars will not be subject to the full rule", adding that "they will instead be expected to undergo a rigorous testing regime and isolate themselves immediately if they test positive for the virus so as not to become spreaders".

"There will be exemptions for sports," said a source.

Other than the fact that the paper only refers to "sportsmen", with no mention of the vast army of technical staff and management, there is the little matter of the claim by top virologists that drivers would need to be held in solitary confinement for up to five days before races.

"Current tests are not sensitive enough to detect infections within the first couple of days after infection," Dr Jeremy Rossman, a virologist at the University of Kent, told the Independent. "Most people will have a detectable virus in three to five days, so testing everyone three times over a span of five days would give good confidence that most people are not infected.

"All staff would have to be isolated during the testing and during the whole event," he added"

In essence, the virus is not detectable if caught in the five days leading up to being tested, and as a result infected personnel could show up as being negative.

In order to avoid this, those who test negative would need to be tested again five days later in case they caught the virus in the days prior to their first test.

Between the two tests the personnel would be required to stay in solitary confinement to ensure they do not pick up the virus from anyone that they might come into contact with.