All European races could be held behind closed doors 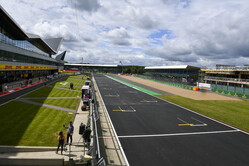 While F1 might have placed half of its workforce on the taxpayer funded furlough scheme, it cannot place the entire sport on it, and therein lies the problem.

Despite the fact that there is relatively no income coming in, the bills are mounting up.

As of yesterday, according to the Nasdaq, at $2.4bn (Ł1.9bn) F1 is worth less than wrestling's WWE, which is valued at $3bn (Ł2.38bn). Indeed, the entire F1 Group, which includes sizable stakes in Live Nation and the Atlanta Braves is worth $5.1bn (Ł4bn).

Consequently the sport needs to be up and running as soon as possible and at the present time almost every option imaginable is being considered.

Despite the extension of restrictions in France and Belgium, and the latest worrying news from China, Zak Brown reveals that F1 bosses are still hoping to hold the British Grand Prix in July as scheduled, albeit behind closed doors.

"Everything is very tentative but it would go on its scheduled date but closed to fans," said the American, according to the BBC. "In fact, it looks like possibly all the European rounds will most likely be in that scenario."

"With our condensed schedule, what's the best way to get as much racing done as possible?" he continued. "One of the ideas is potentially multiple events at the same location, Silverstone being one of those."

While a second, even third, race at the Northamptonshire track is possible, the fact that any changes - such as running on a reverse layout - would require a fresh Grade 1 licence from the FIA - which is not the work of a moment - would appear to rule out that particular option.

However, as we said, no racing means no money, and while the teams are still receiving the regular payments that make up the 2019 prize money, at a time F1 is digging down the back of the sofa, the teams are aware that the clock is ticking.

"It's extremely tough," said the American. "There's little to no revenue coming in. You know, we're not racing. The contributions that the promoters make, sponsor partners, have been great, but they're under an immense amount of pressure themselves.

"So we have kind of turned the faucets off on any money we're spending to limp through to when we're ready to start racing again."