F1 rules overhaul could be delayed until 2023 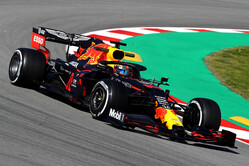 This afternoon the FIA's World Motor Sport Council confirmed a number of regulation changes in response to the ongoing coronavirus pandemic.

As previously reported, while the planned budget cap will still be introduced next year, the swathe of regulation changes originally planned for 2021 have now been held over until 2022.

However, Red Bull boss, Christian Horner believes that the sport might actually choose to postpone the introduction of the rules until 2023.

"We're talking about pushing back a further year the new regulations," he tells the BBC, "because in my mind it would be totally irresponsible to have the burden of development costs in 2021.

"There seems to be reasonable agreement but it needs ratifying by the FIA to push back those development costs into 2022 for introduction in the '23 season," he adds.

"The most important thing we need now is stability," he insists. "Because the one thing we know is that whenever you introduce change you introduce cost, and stability right now and locking down as much of the car as possible is the most responsible way to drive those cost drivers down.

"The most fundamental and important thing is taking away the necessity to spend in order to be competitive. So, freezing parts of the car. The monocoque's already agreed," he adds, referring to the fact that next season this year's car will continue to be used. "We're looking at front suspension, uprights, wheels, all the associated parts for that, gearbox internals, probably 60% of the car other than its aerodynamic surfaces and that being frozen for this year and next year."

One of the main reasons for the rules overhaul, other than attempting to level the playing field and thereby spice up the racing, was to reduce costs, and with the sport, and thereby the teams, facing a substantial financial hit, the decision to continue using the 2020 car next year and freezing a majority of components will assist those teams most likely to be affected by the inevitable financial shortfall.

With that in mind, Horner says there is talk of lowering the proposed budget cap still further.

"There is positive and healthy discussion going on among all the teams to be responsible. And it's not just about the cap," he said. "The cap is a ceiling. It is almost secondary as far as I'm concerned, it is reducing the cost in order to go racing. With, let's say, 60% of the chassis frozen for the next 18 months, that will have a dramatic effect on reducing the operational costs of a Grand Prix team, whether that be for Red Bull or Williams."

It is not only the teams that are suffering however, for the stock price of F1 has crashed in recent weeks leading to all manner of speculation, including talk of Liberty Media looking to sell up. Horner, however is confident that the sport will weather the storm.

"F1 is a very strong business and it's got enormous heritage," he says. "F1 will survive this. Whether all the teams survive this is another matter, and it is the responsibility of all the team principals to act with the interests of the sport and all its participants (in mind), to do our best to ensure all ten teams come out the other side.

"The difference in 2008 was we were still racing, there was still a calendar, there were still events," he continues, referring to the financial crisis of that year. "You could see the issue more clearly, whereas here we are more blind.

"When will we start racing again? It's a different scenario. 2008 had its pressures and the people in the room at that time - Ron Dennis, Flavio Briatore and so on - were thinking about the interests of the sport and it is crucial we do that collectively at this time. The world is a different place at the moment. Of course revenue is hit very hard. We don't know how hard it will hit F1 yet.

"All the teams have been reacting responsibly and collectively. Obviously some teams are more exposed than others, particularly the small ones, and it's important that we try our best to protect the F1 community as best we can.

"To be honest, the Liberty structure is quite complicated and you can only imagine that Live Nation, the owner, is also taking a hit on the events business," he admits. "But they have deep pockets as well. And they have always taken a long-term view on this. I think they will do whatever is needed to ensure the sport continues."