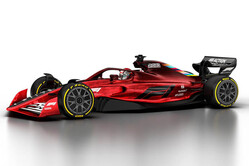 Like much of the world, Formula One is currently in uncharted territory.

With no real idea when the season will finally get underway, but aware that the sport must be ready and waiting when the all-clear is finally given, all manner of contingency plans are being put in place.

The summer break has been moved forward to spring in order that F1 bosses with basically have a 'free calendar' when they are finally able to plan the season.

However, at the back of everyone's mind has been the fact that next year sees the biggest overhaul of the sport's rules in living memory, an overhaul aimed at totally reshaping the sport by levelling the playing field and moving away from the current domination by the big three while the midfield battlers pick up the remaining crumbs.

The uncertainty over the 2020 schedule however has caused many to wonder if the sport might be best served by delaying the rules overhaul, and in a conference call all but Ferrari agreed that this might be the best idea.

Ferrari wasn't against the idea per se, the Italian team merely wanted more time to consider the proposal.

Now, ahead of further talks with F1 bosses and the FIA, Mattia Binotto says his team will agree to the move.

"We will have a conference call with all the other teams, F1 and FIA to discuss the situation and the impact it has not only on this season but also on the next one," he told the official F1 website.

"We must carefully evaluate every aspect and see if it is not really the case to think about possibly postponing the introduction of the new 2021 technical rules.

"In any case, Ferrari is ready to take responsibility for a choice that must be made in the ultimate interest of this sport, it is certainly not the time for selfishness and tactics."

It's thought that the decision could be announced as early as Friday.