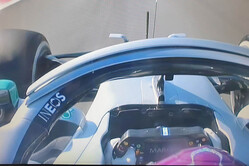 On-board footage from Lewis Hamilton's Mercedes this morning has raised questions over the legality of the W11's steering system.

On-board footage distinctly shows the word 'Marker' appear on the dash display as he heads down the main pit straight, at which point Hamilton pulls the steering wheel towards him and subsequently push it away on entering the corner. At the same time the front wheels appear to straighten and dip, suggesting that the system is changing the toe-in.

Such a system would breach Article 10.2.3 of the technical regulations which stipulate that "no adjustment may be made to any suspension system while the car is in motion.

"With the steering wheel fixed, the position of each wheel centre and the orientation of its rotation axis must be completely and uniquely defined by a function of its principally vertical suspension travel, save only for the effects of reasonable compliance which does not intentionally provide further degrees of freedom.

"Any powered device which is capable of altering the configuration or affecting the performance of any part of any suspension system is forbidden."

Altering the toe-in would have a number of obvious benefits including stability, improved handling, reduced drag on the straights and reduced tyre wear.

Indeed, one theory is that the system is aimed at preventing the tyres cooling down on the straights as opposed to any aero benefit.