Haas to launch in Barcelona 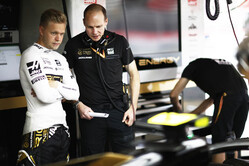 Haas has become the latest team to confirm when the wraps will be taken off its 2020 contender.

Like Alfa Romeo, the American team will reveal its car on the morning of Wednesday 19 February, the first day of pre-season testing at Barcelona.

The move leaves Red Bull and Williams as the only teams still to confirm their launch dates.

2020 is likely to be a make or break season for Haas, with many fearing that Gene Haas will pull the plug on the operation unless there is a return to the sort of form witnessed in 2018.

At last year's season opener, it really looked as though Haas was in business, Grosjean and Magnussen claiming sixth and seventh in qualifying. However, while the Dane finished sixth in the race, his teammate was to suffer a repeat of the same unsafe release that had sidelined both drivers just twelve months earlier.

Sadly, in many ways, Australia was as good as it got.

While Magnussen, in particular, continued to perform brilliantly in qualifying, making it to Q3 in five of the first six races, everything fell apart on Sunday afternoons.

Though most teams had a window in which their tyres are at an optimum, at Haas the window was miniscule.

In Bahrain, Magnussen was close to pulling off the upset of the season, when he almost out-qualified Max Verstappen, but next day the Dane was almost speechless after slipping down the field and struggling to finish 13th. More was to follow in China and the Azerbaijan.

Though the team introduced an upgrade in Spain it only made matters worse, and it wasn't long before it became clear that the American outfit had a fundamental issue. As it struggled to understand the problem, far less solve it, all manner of fixes were tried, with Grosjean reverting to the Melbourne spec.

Later in the year as the struggles got worse, Steiner admitted that he should have listened to his drivers, Grosjean never happy with the Barcelona upgrade while the team continued with a 'pick and mix' approach to its aero package depending on the circuit.

Soon, Saturdays, like Sundays, were a write-off, and as Magnussen appeared to lose faith, Grosjean's qualifying efforts began to improve only for things to fall apart next day.

In the lottery that was Germany both drivers scored points, but other than that it was slim pickings, Magnussen ending the season with 20 points and Grosjean just 8. From 5th in 2018, the American team had now slipped to ninth, ahead of Williams... the two teams having spent the latter part of the season battling one another… a sad fall from grace for both.

As if things weren't bad enough, in Austin Grosjean crashed in practice. Normally this wouldn't have been a big issue, but as the Frenchman was running the team's much-anticipated new front wing - of which there was only one - it was.

While there has been concern about the future of the team for some time, when it was announced in September that Grosjean was to continue with the team in 2020 the speculation only intensified.

Other than its woeful problems on track, as expected the Rich Energy deal went sour, and on the day after the Italian Grand Prix the American team announced an end to the partnership. Whether it got paid what it was owed we shall probably never know, but for Gene Haas it probably served as just another kick in the stomach.

While the business model Haas chose when it entered the sport seemed reasonable, and in many ways could prove the way to go once the budget cap is introduced in 2021, it has also meant that the team didn't have the resources to react to the situation it found itself in 2019, and was therefore unable to get on top of the issue.

Though the VF-19 had strong one-lap pace, especially at the beginning of the season, its susceptibility in terms of the ultra-narrow tyre operating window meant it struggled when performance was really needed.

The VF-20 needs to be a significant step forward.