Alonso: Hamilton has his weaknesses 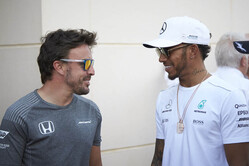 Though they enjoyed a fractious time as teammates back in 2007, Lewis Hamilton and Fernando Alonso grew to respect one another, and though the Spaniard rarely had the equipment to take the fight to his British rival, that respect has endured.

Yet to confirm his plans for 2020 (and beyond), though a return to F1 is looking increasingly unlikely, Alonso, while expressing his admiration for Hamilton, admits that the Briton has his weaknesses but that rivals fail to exploit them.

"He's made a step forward, he is more competitive, more prepared," he tells F1 Racing magazine, ahead of a season in which his former teammate is widely tipped to claim his seventh title.

"He still has some weak points that have not been stressed yet," he adds, "(but) no-one is pressing that button, that weakness.

"He's raised the level the last couple of years," he admits, "especially in 2019 when the car has not been as dominant as other seasons. If he cannot win, he's a very close second, not 20 seconds further back, which is what happens a little bit with Valtteri. A weekend when the car is not as competitive, Bottas is fifth or sixth or a minute behind - but Lewis is not.

"If you study Lewis' season, there is always a common trend," continues Alonso, who, along with his two F1 titles, has won Le Mans twice and recently finished 13th in the Dakar Rally. "He starts the year slowly and no-one takes the benefit of that. We all get excited that it will be the year of Bottas, but it's not.

"It would be nice to compete against him in a proper fight," admits the Spaniard, who enjoyed battling Hamilton both as his teammate at McLaren, and then following his move to Ferrari.

"Maybe his weak points are not real and everything is calculated but it would be nice to discover. When you have a good package and the other guys crash and you extend your championship lead, everything seems calm.

"If you are only one point behind or ten points behind, the stress is different. The mistakes are different and your radio communications are different. We need to see him when the pressure is on."

Having recently parted company with McLaren, it is anticipated that Alonso will return to the Indy 500 this year, most likely with Andretti.

Should he win a seventh title this season, Hamilton will have matched Michael Schumacher’s record which has stood since 2004. On a number of occasions, particularly last season, the Briton showed glimpses of the same remorselessness in dealing with rivals that characterised the legendary German.