Fry to start with Renault next month 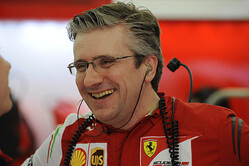 Renault has revealed that Pat Fry will begin work as technical director (chassis) next month.

The Briton's recruitment by the French team was revealed last November as part of its move to strengthen its technical team.

At that Fry was on gardening leave from McLaren, having joined the Woking outfit in September 2018 following a number of high profile departures including technical boss Tim Goss and engineering chief Matt Morris.

Fry, who had previously been recruited by Manor as an "engineering consultant", began his F1 career in 1987 with Benetton where he was initially an R&D engineer working alongside Pat Symonds.

Following time as an engineer with the Enstone outfit's test team and race team, in 1993 he moved to McLaren where he was in charge of the Woking outfit's active suspension programme.

Rising to the role of chief engineer, Fry left Woking to join Ferrari as technical director and head of race engineering in 2011.

Prior to the announcement of his recruitment, Renault had confirmed it had secured the services of Williams aero boss Dirk de Beer, the two high-profile signings suggesting that the French team, contrary to widespread speculation, is set to remain in the sport beyond 2020.

"I am delighted to be able to work with Pat again," said Marcin Budkowski, Renault Sport Racing UK Executive Director. "His arrival is yet another step as we build and improve our team structure.

"Pat's experience, talent and determination will be additional assets as we continue our progress."

Taking to social media today, Renault revealed that Fry will start with the team "on 5th February" and "will attend the team’s season opener on the 12th February in Paris".