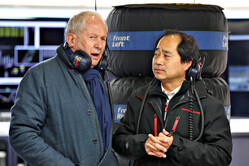 In its second season with Red Bull, Honda is seemingly pulling out all the stops in a bid to allow Max Verstappen to take the fight to Mercedes on a more regular basis.

However, this means being competitive from Melbourne onwards, and with the RB15 not having been truly competitive until updates were introduced at the team's home race in Austria last season, Red Bull must have an all-round competitive package from the outset.

We want to fight for the championship and to do so we know that we have to be competitive with the chassis right from the start, and that means the very first race," he told Motorsport.com.

"Honda has good increases for this year," he added, "and since everything has been fulfilled so far, we assume that this will happen.

"That means we have no more excuses, in plain English," he admitted, and when asked, having predicted five wins in 2019 - when the team actually won three - how many wins he thinks the team can take this time around, he said: "I think it will have to be more than five."

Initial reports worryingly suggest that Mercedes 2020 engine is the German manufacturer's most powerful to date, while at Ferrari early reports suggests the Italian team has once again gone the wrong way in terms of aero.

It is anticipated that, like Mercedes last year, Ferrari will essentially run two cars in pre-season testing, the 'basic' launch version at the first test and a more advanced aero package, with the opening races in mind, at the second.