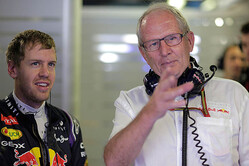 Having first been recruited to the Red Bull Junior Team in 1998, aged 11, Sebastian Vettel subsequently graduated to the full Red Bull Driver Programme in 2001.

Though making his mark in the German BMW Formula series - winning 18 of 2004's 20 races - and subsequently making his F1 debut with BMW Sauber, when he replaced Robert Kubica in the 2007 United States Grand Prix, it was under the guidance of Helmut Marko that he truly began to flourish, first with Toro Rosso, just weeks after his F1 debut, then four successive titles with Red Bull.

At the end of a difficult season for the German, and amidst constant speculation over his future, Marko has admitted that Vettel is not racing at his best at present, but warns that the German should not be written-off.

"Unfortunately, I have to say that he is no longer among the best," the Austrian told Motorsport-Total.

"He was spoiled by Red Bull because we always spoke honestly with one another," he added. "Ferrari is known for politics within the team, and maybe Sebastian is a bit too honest.

"Perhaps, also, it came as a surprise to him how fast Leclerc is," he admitted. "But don't write him off just yet."